Research based on exclusive YouTube data and a survey of thousands of users in multiple countries shows that YouTube reduces music piracy.
The study itself was commissioned from RBB Economics by Google itself, as it tries to answer the question of whether YouTube is a net positive or negative for the music industry. The video sharing giant has repeatedly come under scrutiny from music companies alleging low returns to the industry from music on its service.

RBB Economics published its first paper as part of the study today, which tests the cannibalization effect of YouTube: whether or not the availability of music on YouTube cuts down use of other, potentially more lucrative, streaming services.

The researchers found that the absence of music on YouTube would instead push users to lower value music channels, including piracy websites. 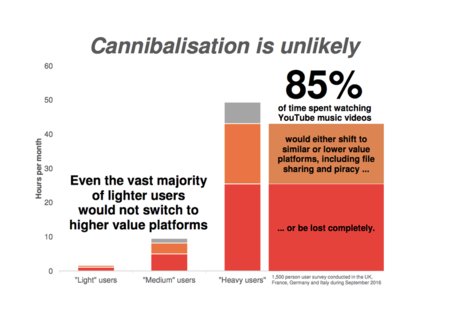 "In the absence of YouTube, time spent listening to pirated content would increase by 29%, suggesting that people are going to YouTube instead of pirating music," the study finds.

"And further, blocking music from YouTube does not lead to an increase in streams on other platforms."

YouTube paid out over $1 billion in revenue to the music industry last year, though the music industry has questioned this claim. Revenue is generated on YouTube primarily through advertising, and YouTube's ContentID system allows the industry to monetize content uploaded by fans too.