Next Apple Watch to have a new type of health sensor? 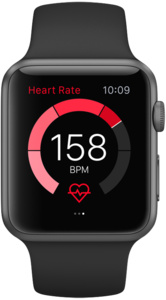 Many Apple fans are probably already waiting for the upcoming iPhones that will be introduces in early September, if previous years are any indication. However, Apple has a lot more in store in terms of services and products.
Apple Watch hasn't been as relevant in recent history as it was when it first launched but the company is working on a major update. CEO Tim Cook has been seen wearing a new type of sensor added to a Apple Watch, CNBC reports.

Ever since unveiling the first Apple Watch with a heart rate sensor, the Cupertino giant has been more interested in health applications in both software and hardware. The upcoming new version could bring an even more important health related sensor.

The sensor is said to monitor glucose levels continuously without invasive measures. This "holy grail" of blood sugar tracking would be a huge help to people suffering from diabetes. Because the measurements are not necessary for the larger population it might be an external accessory.

Apple hasn't usually released new Apple Watches in its developer conference in June and it is unlikely this years WWDC is any different but with an update to watchOS we might get some indication if Apple is indeed going to add this function to their smartwatches.