Apple having problems with the iPhone 8 and its advanced features? 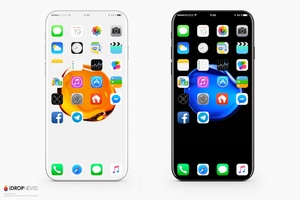 Since Galaxy S8 was released to the world in late March most of the smartphone rumors have been revolving around Apple. Obviously there are other smartphones released this year that are of interest, including recently released OnePlus 5 and Note8 coming possibly in September, but iPhone, and especially the iPhone 8 as it's called for now, have been under scrutiny.
Now, Apple's upcoming iPhones have been said to come in three flavors for a while. Two of them are said to be rather minimal upgrade we're used to seeing from the S models, like the iPhone 6s compared to previous iPhone 6. However, according to most rumors and leaks the iPhone 8 is where everything is at.

While iPhone 7s and 7s Plus are said to sport most of the same features from its predecessors, the iPhone 8 might be a leap forward perhaps never seen from an iPhone. Some of the technologies suggested are a full front panel display with no home button, fingerprint sensor inserted in the display, and a 3D front facing camera.

This does come with several problems, though. First of all, Apple might not be able to produce it in same volume as it usually does. This means that the more advanced iPhone is going to be a more limited edition that according to Apple analyst and blogger John Gruber the device might cost $1200 if not more.

However, this is not the problem Apple is worried about. According to several rumors Apple is having troubles getting the iPhone 8 even released in time. CNBC's sources say that Apple is postponing the release several weeks into October. This would be the first time since Apple has released an iPhone in October, excluding iPhone 4s.

Other have heard that Apple won't be able to get some key new features ready in time for release and will be forced to fix them or enable them altogether later on with a software update. This wouldn't of course be the first time as the Portrait mode was not available on iPhone 7 Plus when it was released and was only added a month later in a software update.

It's of course not clear at this point whether either of these rumors hold true. The expected release date is still couple months away so Apple might be able to fix the problems before that. Or completely fail to meet expectations in a way that both of aforementioned scenarios become reality.
Tweet
Tags: Apple rumors iPhone 8
<Open your calendars! Netflix's Stranger Things season 2 gets a release date, and a teaser >80 percent of Windows phones just lost support
Previous Next
Comments have been disabled for this article.