Apple has launched an upgraded version of its Watch device at the Steve Jobs Theater today, untethering the device from iPhone.
The firm made a big deal out of the fact that the Watch is now the number one selling watch in the world, and that it claims a 97% customer satisfaction rate. Additionally, the Watch is also the most used heart monitor in the world, and Apple wants to exploit that fact.

Above all else, the best thing about the Watch upgrade is it no longer has to be tethered to an iPhone when you are on the road. Instead, the Watch has built in LTE support, connecting directly to your cellular network. This will make Watch more attractive to those who don't want to switch smartphone OS.

For health-conscious users of Watch, Apple is making several notable software changes, including a completely redesigned workout app. The user's heart rate is now also displayed right on the watch face, and can notify you if it detects an elevated heart rate when you are not active.

Additionally, it can also detect arrhythmia, when your heart beat is not regular. Working with the FDA and Stanford researchers, Apple is also producing an "Apple Heart Study". 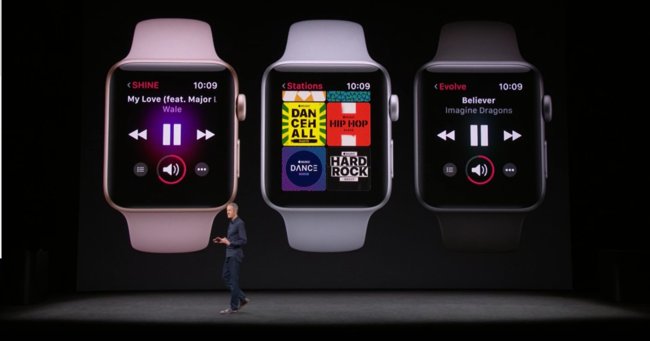 Under the hood, a new processor boosts performance by 70 percent while a custom wireless chip called W2 increases efficiency for Bluetooth and WiFi considerable. For LTE, the display itself acts as an antenna and the device uses an electronic SIM, that is a fraction of the size of a micro SIM card. This innovation means the case for Series 3 is the same size as the case for Series 2.

Orders for Watch Series 3 can be placed from Sept 15, and it will be available Sept 22. Without cellular, it will cost from $329, while adding cellular bumps the cost to $399. The previous generation, Series 2, is still available with a new base price of $249. 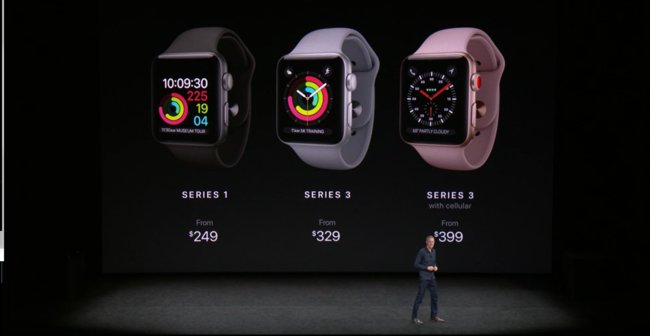 399.00 for an LTE watch that no doubt will require another service plan, even though it's kinda attached to your existing IPhone is way high.

Smart watches are so lame. I immediately judge the Hell outta someone as soon as I see them wearing one. Talk about wanting to be "trendy".

Few exceptions are always made of course, for those that use the watch for a legit reason, like their business actually requires constant viewing of phone to field incoming emails for say...tech support. Or maybe loved on is in hospital with touch and go conditions, then I'd say ok but that's it!

Yup, I'm reading that others are reading an extra 10 bucks a month for this trendy P.O.S. with the LTE built in. Uses same number as your cell phone but.........what moron would actually pay for an extra feature that is already fulfilled by the phone itself. So for that extra "trendiness" it's 399.00 plus 120/year. So 520 for first year alone to see what is already on your phone but is now on your watch. LAME!