Google Assistant robocalls too human to not include a disclaimer 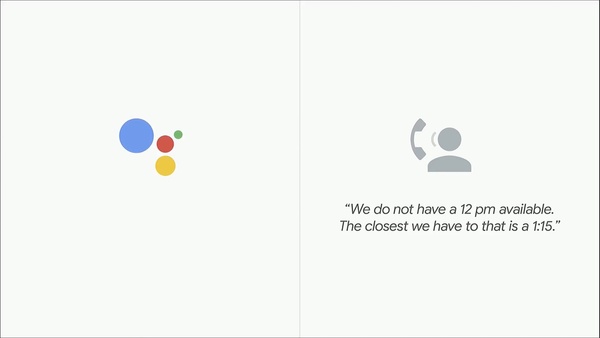 Google's I/O conference keynote was focused largely on the improvements of Android, its apps, and the new navigation scheme Android P will bring along. It's perhaps hard to pick one that was more important than the others, but there surely was one that was the most controversial.
That is, of course, Google Duplex. That is the upcoming feature of Google Assistant, the search giant's super advanced voice assistant. In fact, Duplex makes Assistant so smart that it can make calls for you.

Pretty much everyone was flabbergasted about how natural the calls sound, although you won't be listening them as Assistant does this in the background, but many were also puzzled whether this might have ethical consequences.

Should the recipient know that he or she is not talking to a human? With all the "umms" and "mmhmms" Google Assistant had seemed to passed the Turing test in demo calls played back at the I/O stage.

And now, in an interview with CNET, Google agrees. Agrees not only that Turing test might have been passed but that it is necessary to make sure the receiving end of the call is aware that they are talking to a robot.

Currently it is not known how this will be implemented, even though Google does say that they've been anticipating this criticism or concern. One would imagine that a disclaimer in the beginning might result in large portion of the calls being hung up.

It remains to be seen how Google tackles this ethical quandary. It's a good thing Siri can barely tell you the weather.

Does this mean that Lisa, Google's new assistant has passed the Turing test???

So does this mean that Lisa, Google's new advanced voice assistant has actually passed the Turing test???

The Turing test is the holy grail of AI.

It may just be a legal thing; it technically has to record a phone call...even if only for a couple seconds at a time. Doing this without notification or court order is illegal in a lot of states.

As for a disclaimer making people hang up, I doubt it. If this thing is calling a business it is to make a reservation, purchase a service, etc. It doesn't look like it calls just to ask questions like, "do you have cod this time of year?" or "do you carry Schlage locks?". Basically any call from this is the main reason a company has a phone number in the first place. Some might be annoyed by talking to a robot, but when it is essentially a guaranteed sale few will hang up.

I do wonder how it will handle nuance and such. If you ask it to make a reservation at 6PM and they say they only have openings at 545 and 630, does it then tell the user that the restaurant is fully booked? If you tell it you want an appointment at 6PM...and the place you are calling is on the other side of a time zone line, how does it handle that? What about phone trees? Half the time humans don't even know what selection is most appropriate for what they want. Does it just try zero until someone hopefully answers? Heck, how about after hours calling. If it is midnight and I ask it to make a reservation for a week from now at noon, is it smart enough to call back based on the answering machine message?