Recent headlines | Android 11 update tracker - What phones will get it?
AfterDawn > News > This tiny retro game console outsold Xbox One and PS4

This tiny retro game console outsold Xbox One and PS4 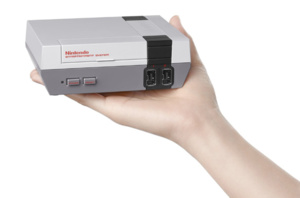 A couple years ago Nintendo released what seemed like a silly promotional product, a mini version of the good old Nintendo Entertainment System, or NES.
After NES Classic other companies followed suit, including Atari (although their approach is way different), but it was the NES Classic with the strong lineup of classic retro games that caught all the attention. So much so that it was sold out almost immediately.

Huge demand meant that the prices rose to ridiculous amounts in the second-hand market. Now, two years later, the NES Classic is back and the supply has been far better.

The demand is still there which is proven by the fact that according to market research firm NPD it has outsold all other consoles, including the current generation favorites Xbox One, PlayStation 4 and Nintendo Switch.

This even though NES Classic was only sold for a few days during the analyzed period (June 2018). Of course one has to remember that NES Classic costs $59 while the others go for several hundreds.

So as the tweet by NPD analyst Mat Piscatella below shows, NES Classic outsold PS4 by unit numbers but not in dollar sales. If you want to know more about the numbers of both software and hardware sales head to Twitter and read the thread.

US NPD HW - The NES Classic was June 2018's highest unit-selling hardware platform, while the PlayStation 4 led the market in dollar sales. This is the first time a Nintendo Entertainment System console has led in monthly unit sales since NPD tracking began in 1995.


Tweet
Tags: Nintendo NES Classic
<Apple is the first company worth $1 trillion: Here's Tim Cook's letter to employees >No headphone jack, not even a dongle, in next iPhones
Previous Next
Comments have been disabled for this article.