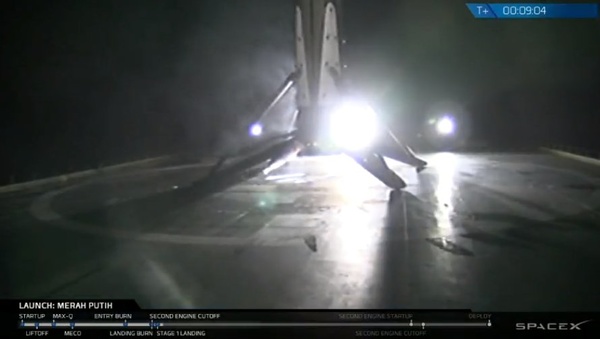 SpaceX has successfully reused a previously landed Falcon 9 booster based on its final 'Block 5' design.
This is not the first time that SpaceX successfully relaunched a previously flown and landed (or as SpaceX describes them: flight proven) booster, but it is the first time that it landed a Block 5 booster. SpaceX is hoping to reuse Block 5 boosters up to 100 times, and to fly no less than 10 times without the need for maintenance.

Last night, SpaceX launched a commercial satellite to geostationary orbit for Telecom Indonesia. The booster / first stage of the rocket was previously used back in May when SpaceX launched the Bangabandhu Satellite-1 into orbit.

NASA has also announced the first astronauts that will fly to space on a human-rated Dragon capsule from SpaceX. The Crew Dragon will have to pass a couple of test flights before the company will be able to fly humans.
Tweet
Tags: Falcon 9 SpaceX
<AMD's new top-of-the-line Ryzen chip goes on sale for $1799 >Alex Jones' Infowars targeted by Apple, Spotify, Facebook and YouTube
Previous Next
Comments have been disabled for this article.