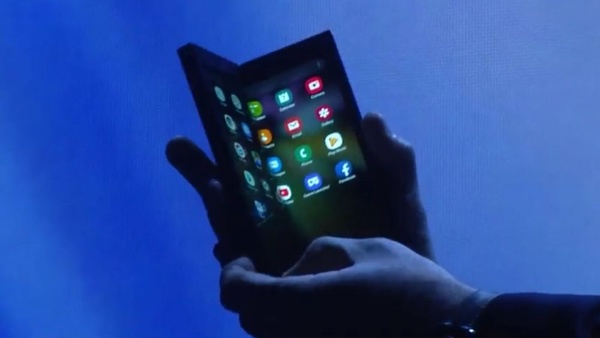 Innovation used to be Samsung's ticket to success with ever better Android phones. As often happens with large companies, Samsung kind of forgot to innovate.
Recently the Korean conglomerate has tried to revive its roots in hardware innovation by introducing new features first in cheaper devices. This happened with the Galaxy A series phone earlier this year that features four cameras.

However, yesterday's Samsung event unveiled an innovation that the company has been working on for years and years.

The new Infinity Flex display makes it possible to create foldable smartphones/tablets. They even showed off one at the dimly lit stage.

Clearly Samsung doesn't want you to see the device yet, but the concept is there. It looks like the phone is extremely thick, which seems given if you fold any tablet in half.

Not that it matters really, since the device is very likely a prototype for a concept that hasn't even sure to hit the market.

Not to say Samsung isn't determined to bring it to the people. In fact, it seems that Samsung really needs something like this to turn the ship around.

Tweet
Tags: foldable phone Samsung
<Spotify to extend Connect to free users >YouTube lands on Nintendo Switch
Previous Next
Comments have been disabled for this article.