Recent headlines | Russia introduces new 100 rouble bill - but you can't get it from ATMs or to pay with it
AfterDawn > News > Review: Sony WH-1000XM3, Worth the Hype? 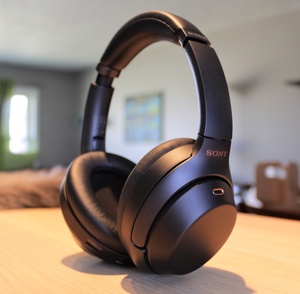 Over the past few months, Sony's newest set of wireless active noise canceling headphones have gotten a lot of press and good reviews. The WH-1000X series has reached its third version, Mark 3. This WH-1000XM3 has been crowned the new ANC king by reviewers and influencers alike.
Sony promises a fairly diverse set of features with the WH-1000XM3, which should prove them one of the more versatile headphones around. There should be top notch noise cancellation, support for passive use, quality design, a multifunctional smartphone app, and amazing sound.

So, of course, we had to try out these things ourselves, and see if the hype is really real.

Sony has taken a fairly conservative line in the design of the WH-1000XM3. There's not much to differentiate between the older models, and all-in-all these headphones are not, and have never been, designed to be a head-turner in terms of the design.

Both are stylish even though they don't offer anything out of ordinary, or perhaps for that specific reason, they are what one might call ageless. 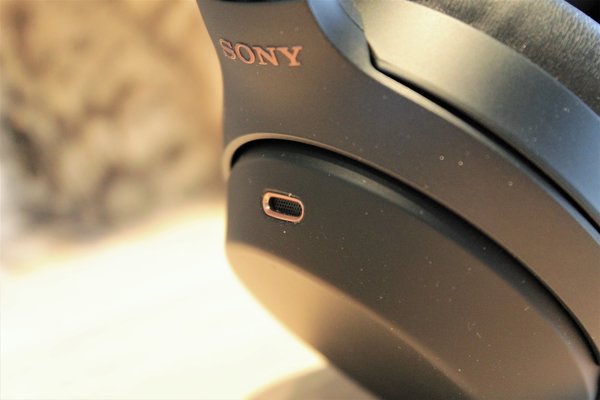 Only the Sony logo and the microphone grills on both sides break the single color paint job with a gold or, in the black models we reviewed, copper-colored detailing.

The industrial design is solid too. The soft touch brings some class even to the plastic design and if it wasn't for the slightly odd placement of the microphones at the top of each earcup - oddly almost as far as possible from the mouth - there's nothing out of ordinary here.

Although you can see and feel the quality and attention to detail straight off the package, it's only when you put them on your head that really feel and hear why they might be worth the $349 price tag.

The silkiness of the smooth plastic translates straight to the super soft ear cups and padding on top. 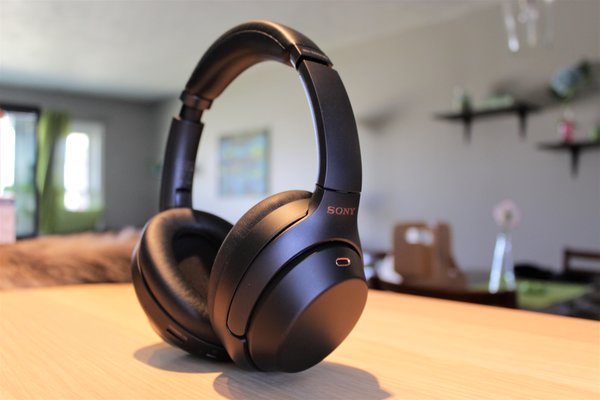 There's nothing here that you would think is out of place or perhaps unnecessary, these are not headphones for showing off or for flashy people. Everything seems to be made for practicality and comfort.

The telescope mechanism and hinges all work smoothly, although a crispier clicks wouldn't hurt.

It's hard to find a fault in the design of this pair of headphones.

Even after hours upon hours of using the headphones, the pressure doesn't become too intense. And that is spectacular considering how effectively they hug your ears.

One thing that has to be acknowledged in addition to the device itself is the carrying case. It's a hard case topped with grey fabric and includes a strap and side pocket.

Some people have complained about how the headphones fold into it, but it never really was a problem for me. Perhaps the size of the case is larger than if the headphones would do a double fold in it instead, but then it probably wouldn't be as flat.

The USB-C cord and 3.5mm audio jack as well as the airplane connector fit neatly in the middle of the case. 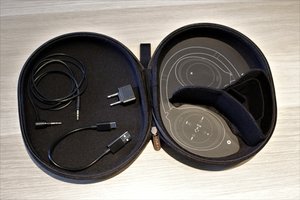 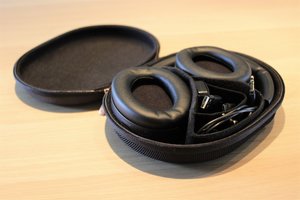 Even though these are by type one of the most multi-functional set of headphones out there, they don't really look too gadget-y.

Sony has chosen to keep the simple design with only two physical buttons.

One of these is the power button, and the other controls the noise canceling. The former is as simple as it gets, press it for around two seconds and the headphones turns on - repeat and it turns them off. 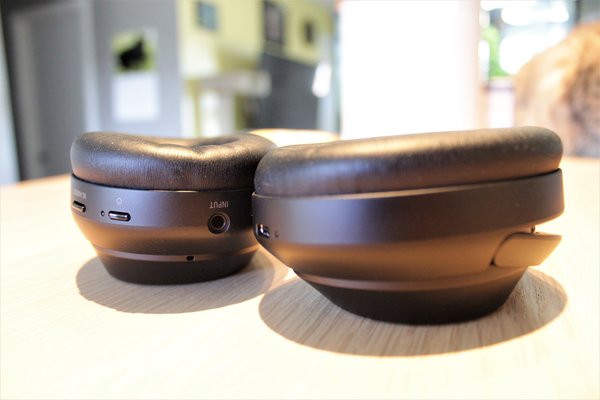 More about these options in the next section.

Most of the controls, including of course the playback controls, are found from the right cup where Sony has included a touch-sensitive control panel.

Furthermore, there's a long touch that will open Google Assistant on Android, and even Cortana on Windows 10.

One of the few controls I would've perhaps liked to see as an old-school button is volume. Physical volume controls just are better in terms of promptness and tactility than a touch.

There's also a mode that helps you quickly turn on the ambient sound mode, for example, to discuss with a coworker or cashier. You just cover the right earcup with your hand and the headphones turn the music down, and let the sound through using it's Ambient Sound Control.

Functionality-wise the headphones are near perfect but there's one technological shortage: that's Bluetooth 5.0 and simultaneous Bluetooth connections. The headphones only support v4.2 and can be connected to only one device at a time, so switching listening devices is harder than it could be with more modern technology.

There is NFC, however, which helps pairing with devices that support that.

Many of the previously mentioned functions, including noise canceling, require a Bluetooth connection, but the WH-1000XM3 also have a 3.5 mm audio jack that can connect them passively to any device in a traditional wired way. 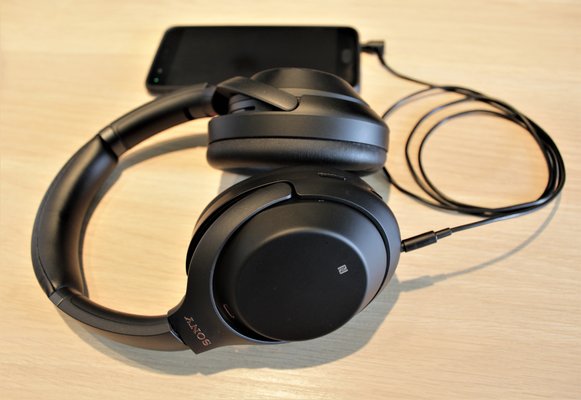 The headphones come with a 4 feet cord that has one straight connector and another L-shaped one.

When connected with the cord, the headphones work without battery completely passively like any traditional headphones.

When it comes to battery life, Sony promises 30 hours of battery life with noise canceling, and another 8 hours more without the use of Ambient Sound Control.

These are only optimal times Sony has managed in controlled situations, so don't expect to hit them yourself.

Charging the headphone is done with the USB-C port found on the bottom of the right earcup. Unfortunately, the headphones don't come with a USB wall adapter but you probably have a dozen of those lying around. 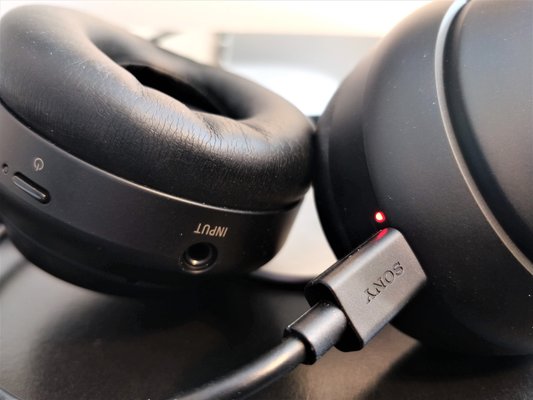 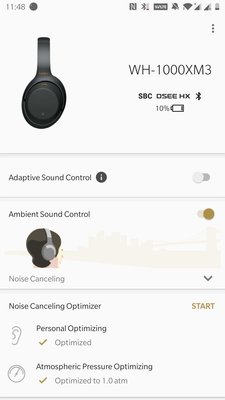 If you've never used ANC, it basically tries to cancel the ambient sound by flooding your brain with noise. This sounds to you like the ambient noise is getting quieter, sometimes to the point that you can't hear it at all.

Even with the best ANC, you can't cancel the loudest noises and especially vociferous events, but ambient sound can be removed effectively with ANC, especially combined with music.

One of the features the QN1 processor, as well as the smartphone app (Sony Headphones Connect), enables is what the company calls Adaptive Sound Control. ASC automatically chooses which type of ambient sound control is required for each situation.

By default it includes four modes (Staying/Walking/Running/Transport) which change whether it lets ambient sound through or tries to completely block it.

By default, ANC seems to be on when you turn on the headphones, although with platforms that support the app the previously used settings are saved. Automatic enabling might be annoying if you don't usually want to use it with that specific platform.

Long-pressing the ANC button will turn on noise cancellation optimization, which will determine what type of ambient noise surrounds you and turns on appropriate cancellation. This is suggested when changing to a very specific loud environment, like a plane (do this after the ascent is done).

You can control pretty much everything from Sony's Headphones Connect app, which you should definitely download to your smartphone. The app allows you to change both the amount of noise cancellation and ambient noise. 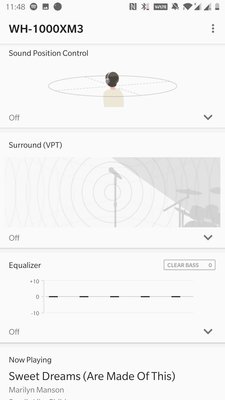 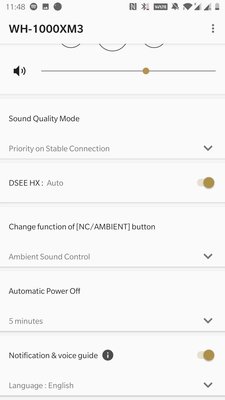 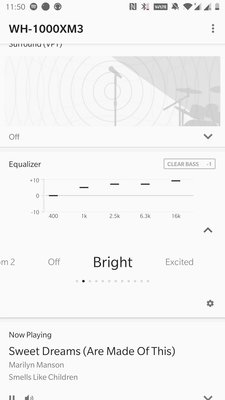 When it comes to ANC, the Sony WH-1000XM3 truly delivers. They are by far the best ANC headphones I've ever used, although there are only a few competitors I've tested.

One thing should be clear, the state of noise cancellation should definitely not be a reason not to choose this pair of headphones, and it could be considered even a reason to pick them up if other features don't discourage you to do it.

During the test, we didn't use the ambient noise mode too much, but the feature allowing the passthrough temporarily was very useful.

This is perhaps the most controversial part of the analysis of any headphones.

As someone who isn't an audiophile in the most traditional sense, although I love headphones and especially the good ones, I almost wanted to not write about whether they sound good or not. 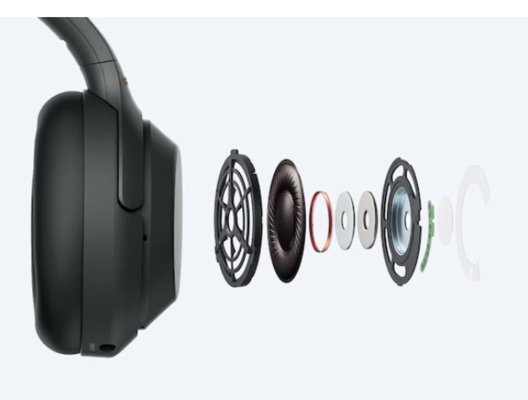 However, the headphones sound really good. So, let's dive in. The sound that the 1.57 " dome drivers put out using the Liquid Crystal Polymer, is slightly bass heavy but offers a wide sound array.

As expected, the WH-1000XM3 are definitely designed for music, more so than a pair of studio headphones. This means that you'll get a rich sound but not as clear and crisp trebles as one would optimally prefer.

By default, they aren't the best podcasting headphones either, but obviously changing the profile changes this dramatically. Just quick change of settings in the mobile app, thanks to easy to use equalize and other options, shows how versatile these drivers really are.

Depending on what you like to listen they might sound amazing out of the box, but no matter what you listen they will sound really, really good after a tweak or two.

The WH-1000XM3 support Sony's DSEE HX which is signal processing technology designed to improve lower fidelity music to sound more like Hi-Res audio. This includes the likes of MP3 music.

It derives from the understanding of what audio sounds like in different music types and how the audio waves form.

The option is on by default, but yours truly with an untrained ear didn't pick up the nuances or perhaps there wasn't any meaningful improvement in our cases. Not to say it doesn't ever make lo-fi audio sound better. 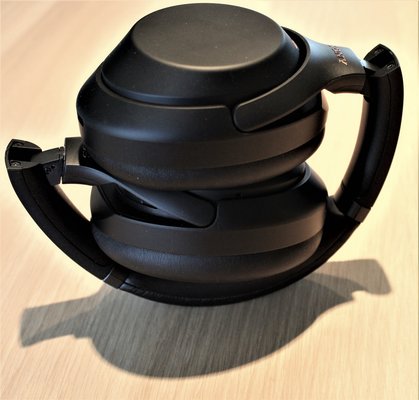 The past several months we've been hearing about these headphones with a complex name, and we've been wondering are they really worth all the hype. There were definitely expectations that were not going to be easily met.

Even with the healthy skepticism towards not only the fairly uniformly positive feedback but the seemingly one-sided hype, the Sony WH-1000XM3 headphones surprised us.

They seem to hit the nail on the head on so many different aspects. The noise cancellation and ambient sound control are top notch, the sound for Bluetooth cans is amazing, they are one of the more comfortable headphones that are also built with a close fit and with passive noise cancellation in mind.

However, this brings us to the one thing that will kill this product for many people: the price.

Sony's newest pair of multi-functional ANC headphones cost around $350, and that is a lot of money for headphones. Obviously, if you don't intend to use noise cancellation, or especially without the cord, it should've been clear from the get-go to look elsewhere.

However, if you are looking for multifunctional closed style headphones that you can use on the computer, traveling with your mobile phone, on the plane with noise cancellation, and do all this while enjoying silky soft comfort, we can't think of why you wouldn't buy them.

Don't get us wrong, they can be made better. Perhaps you want to wait for the next version with multi-pairing Bluetooth 5.0, but that is a very small problem and a long wait if you are looking for new cans.

"If you've never used ANC, it basically tries to cancel the ambient sound by flooding your brain with noise"

This is at best misleading.

ANC is not effective against percussive sounds which do not allow time for reception and generation of an opposing waveform.