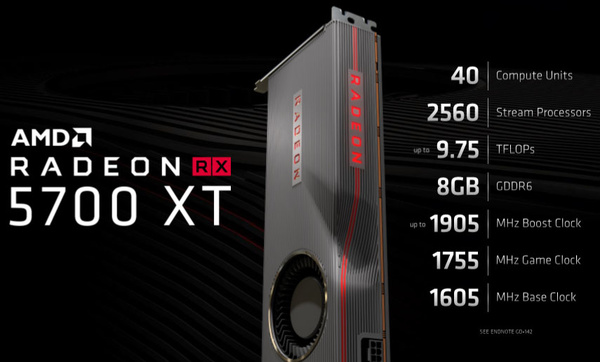 AMD had their E3 press event yesterday where they revealed finally the upcoming GPUs based on the new Navi architecture.
They company had already initially revealed the new generation of GPUs at Computex, but this time around we got some dearly needed details.

The XT version is going to perhaps challenge the RTX 2070 with a bit pricier $449.

Both will be available from July 7 onwards.

If you are wondering whether the new Navi cards support ray tracing like their Nvidia counterparts, that is a definite no, and it's likely that they'll wait until the next generation to properly implement it. Even then the full scene ray tracing is going to be a cloud solution.

However, there is hardware support for FidelityFX, essentially a hardware version of Radeon Image Sharpening, which will make your games sharper in the more challenging spots, like the surface of a racetrack in a simulator.

Tweet
Tags: GPU AMD AMD Radeon RX 5700 XT AMD Radeon RX 5700
<Xbox Game Pass Ultimate gives you access to all the goodies on Xbox and PC >Mozilla to release a premium version of Firefox
Previous Next
Comments have been disabled for this article.