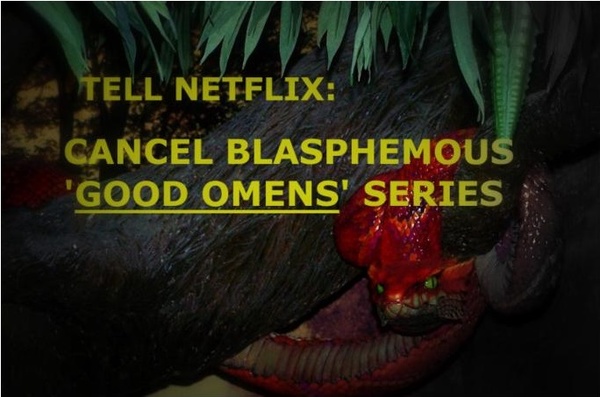 A petition doing the rounds seeking the removal of a 'blasphemous' show from Netflix is met with amusement and ridicule.
There have been many such petitions shared around social media that demand streaming services remove content that offers certain groups of people. In that sense, this is nothing new. However, when you want a streaming service to remove a show from their platform, make sure that the show is actually on their platform.

It turns out that the petition - posted by Christian group Return To Order - was demanding that Netflix remove 'Good Omens' from its platform, despite the fact that Good Omens is actually a show on Amazon Prime. At its height the petition gathered about 35,000 signatures, but unfortunately they seem to have now removed it, undoubtedly prompted by the ridicule.

"This is another step to make Satanism appear normal, light and acceptable," the organization noted on its website originally, according to BGR.

"We must show our rejection. Please sign our petition, telling Netflix that we will not stand silent as they destroy the barriers of horror we still have for evil."

Some users on Twitter already noticed, took screenshots and made light of the error.

Glorious. 20,000 people sign a petition calling for Good Omens to be removed from Netflix. Miraculously God has already done it. Don't tell them She put it on Amazon instead. https://t.co/96PPzDLDxR


Here's a trailer for the Amazon Prime show:

Too much Kool-Aid, LOL

Right? The comedy writes itself...

I hope Netflix does NOT cave in for these religious freaks. Want to eliminate something... eliminate religion. More people have died thru history because of religious wars and prejudice and bigotry than any other single reason. And it still goes on.