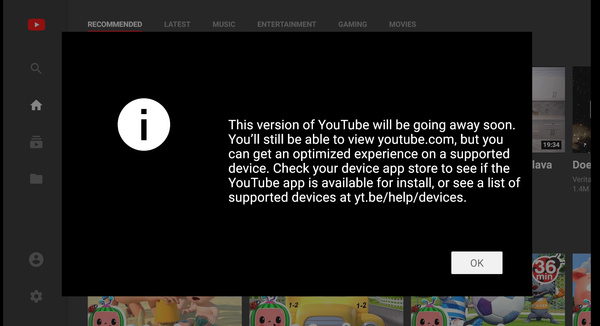 YouTube has become immensely popular in the past few years. It might not be the TV killer everyone thought of, that's probably Netflix, Disney, and others, but it has stolen much of the time spent in entertainment from traditional tubes.
One of the ways to watch YouTube is the web interface designed specifically for TVs. The interface, called Leanback, is meant for big screens connected to PCs. For some reason or another, YouTube is not removing this feature.

YouTube has not given a specific reason for the removal of the interface, but like Android Police thinks it might be due to some manufacturers bypassing YouTube apps and instead using the web interface. Seems like a strong measure to right that wrong, though.

Another reason would be that no one is actually using Leanback as most people who watch YouTube have a smart TV or a smart device with a YouTube app connected to a TV.


Tweet
Tags: YouTube TVs
<Apple releasing iOS next week, iPadOS last day of the month >OnePlus 7T and 7T Pro release date confirmed - here are the rumored specs
Previous Next Write a comment
Comments have been disabled for this article.