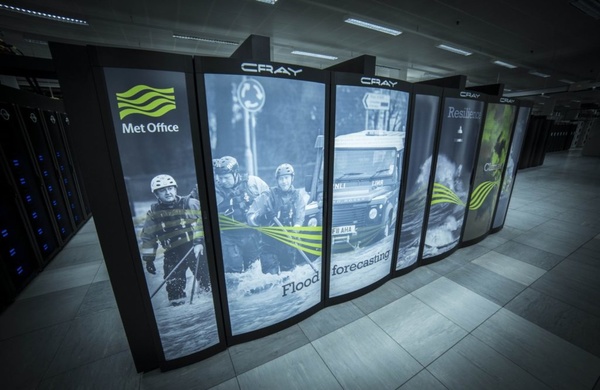 The UK's meteorological office, known as Met Office, has decided on one of its largest purchases. It's not a satellite, or even a constellation of satellites, but instead a computer.
This weather computer is said to cost around 1.2 billion British pounds or $1.6 billion. As one can imagine, it will be the most powerful weather super computer in the world.

While it seems utterly insane to spend billions on weather computers, this thing might actually be able to pay itself back in performance. According to Met Office, the new super computer can pin point weather forecasts to squares only a kilometer wide.

The predecessor, Cray XC40 super computer, has to rely on accuracy that is 10 kilometers wide. Essentially this means that Met Office can calculate and accurately forecast weather for neighborhoods instead of entire cities.

In fact, the super computer isn't even limited to a 1000 meter accuracy. They can improve the accuracy for important target, such as airports, where forecasts can be as pinpoint accurate as 300 meters per square.

Storm Dennis has been ravaging the UK and Ireland, flooding areas and even killing a few people. This is certainly going to make it easier for the government to spend massive amounts of pounds sterling on weather computers.

Unfortunately current situation isn't going to be aided by the new computer – it will be 2022 before the computer is at work. An upgrade is planned five years after introduction and will further improve performance threefold. This is included in the purchase price, which is estimated for 10 year operation.

Tweet
Tags: UK Weather Super computer
<Samsung's Galaxy S20 Ultra has an insane camera that comes with a storage problem >Sony is ready to start teasing us about PS5 details, join mailing list
Previous Next
Comments have been disabled for this article.