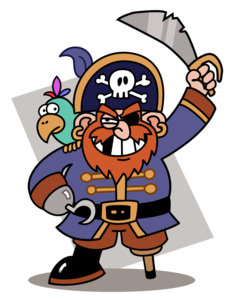 Most of us know that movies and TV series can be downloaded from those shady corners of the Internet, like from various BitTorrent websites, etc. But how the movies and TV series arrive to such services?
Nope, typically the latest movies and TV shows aren't put online by "entertainment wants to be free" enthusiasts, but actual, organized groups, belonging to something that is collectively called the "The Scene" or even more precisely, "The Warez Scene" or "The Pirate Scene".

That "scene" is built from various groups that are more or less organized in order to have the capacity to get the latest movie / TV show releases as soon as possible and then to distribute those movies, illegally, as quickly as possible to specific online services.

Now, some of the core groups of that world have been hit by law enforcement agencies in several countries. Police have raided individuals and servers in at least United States, Norway and Sweden in order to tackle operations of a group dubbed as SPARKS and its affiliated groups called b>GECKOS, DRONES, ROVERS and SPLINTERS.

It seems that the main target of such raids has been the so-called topsites, (S)FTP servers belonging to SPARKS or its affiliates. Such servers are basically extremely private online services where individuals can "drop" the latest pirated movies and where distributors then collect the latest loot and share it to wider audience through better-known services, such as The Pirate Bay et al.

According to news sources, the raids are connected to an on-going court process in New York City where three former SPARKS members are being sued for online piracy, specifcally, movie and TV series piracy. According to the court filings, the alleged SPARKS members now in court were able to fool movie studios and TV studios in order to get so-called pre-release copies of the upcoming movies and TV shows. These materials were then quickly ripped, copied to other format and distributed to group's topsite services.

And, it seems, that some of the three people being sued have leaked information related to the groups inner activities - and helped law enforcement officials to launch the raids in several countries at the same time. According to the federal prosecutors, the movie piracy operations of SPARKS have caused "tens of millions of dollars in losses" to studios over the last nine years.
Tweet
Tags: piracy Scene Group Scene
<Nintendo's 2021 brings a new 4K Switch, report >Elon Musk's Neuralink to demo working brain interface device on Friday
Previous Next

Funny how "studios are losing millions" when the box offices aren't even open due to corona...

they haven't lost any money from me, But they would likely claim their bakery lost money because I don't buy their $8 loaf of bread...

You know what - things are changing fast and I think that's one of the things that are going to change: movie addiction. Along with a stupid belief in reality as depicted by Hollywood.

But now? I watch nothing that isn't real. Youtube vids on science, maths, astronomy, chemistry, physics, workshop vids on woodwork, metalwork, electronics, vids on work: tree felling, earth moving.. and on and on....

And then I watch vids on current affairs: politics, economics, medicine....

And 'future proof' if you see what i mean. Perhaps in future there'll be no financing for multi million dollar childish fantasy movies unless they can squeeze money out of people for every copy that exists.. so to be in the movie scene in the future will be problematic..

But this reality I'm into now? Let the whole internet be brought down and guys will put up their own peer to peer connections, rebuild our own ad hoc internet and they'll still be making these same youtube vids even without youtube.

that's my guess for the future and I'm all for it.

It's m y guess that will happen even if the existing thing survives - they'll run in parallel.

All the movie piracy was about, ironicaly, was the world that couldn't afford it expressing a love and desire to consume their product.

If they'd let the world in they'd have made billions upon billions more than they already make.

But the greedy methods and attitudes they've manifest have shot their own foot, turned people against them and made them look elsewhere and the fact is: elsewhere is good for them/us/me and better And free.

People everywhere already increasingly hostile to 'capitalism' beyond anything reasonable. I mean it's being demonised. By the same dumb meatheads that go around killing and looting and destroying in the name of BLM where clearly at bottom to them No Lives Matter. Dumb peope. Sway our world so very much. Well those same dumb people are hating everything under this blanket word 'capitalism' without ever having any real academic knowledge of what capitalism is or even caring. And those people will - could - very quickly turn on the Hollywood and recording media companies with all their animal wrath.

Because with these kinds of actions they bring that kind of attention down n themselves.

Yep. I think it's a done deal. They are, it is, a thing of the past. Roll on the future. Forget all that crap. It was nice while it lasted but now it is time to grow up and look at real stuff.

Three good reasons to turn away from all that crap. It's for children.

Claims of lost funds is amusing ,since those that download had no intention of paying, in effect the studio's aren't loosing anything, since the downloaders were never going to pay for it