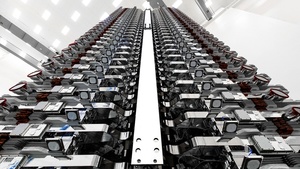 SpaceX has denied recent reports of a near-miss incident involving one of its Internet-beaming Starlink satellites, and one belonging to rival OneWeb.
The news has reignited concerns about the ambitious plans of SpaceX and others to launch arrays of satellites into low-Earth orbit in order to provide low-latency, high-speech broadband services. Critics warn that launching too many satellites into low Earth orbit increases the risk of collisions that could produce large amounts of dangerous space junk, inhibiting future space operations.

There are also concerns about the presence of satellite constellations in orbit and the effect it will have on ground-based astronomy.

In recent days news spread about a close call between a Starlink satellite, operated by SpaceX, and a OneWeb satellite. In a filing, SpaceX essentially accuses OneWeb of spreading false information about what actually occurred.

The initial reports stated that SpaceX has turned off its collision avoidance system when its satellite came within 190 feet of the OneWeb satellite on April 2. OneWeb had performed a maneuver and avoided a collision. Representatives of SpaceX and OneWeb met with FCC staff since the incident.

SpaceX told the FCC that, "OneWeb's head lobbyist recently made demonstrably inaccurate statements to the media about recent coordinations of physical operations. Specifically, Mr. McLaughlin of OneWeb told the Wall Street Journal that SpaceX switched off its AI-powered, autonomous collision avoidance system and 'they couldn't do anything to avoid a collision.'"

"Rather, SpaceX and OneWeb were working together in good faith at the technical level. As part of these discussions, OneWeb itself requested that SpaceX turn off the system temporarily to allow their maneuver, as agreed by the parties."

SpaceX went on to deny there was any close call / near miss at all.

There are currently 1,378 Starlink satellites in orbit while SpaceX is approved to operate 12,000 in orbit. It is also seeking clearance for an additional 30,000 to supplement the 12,000 satellite constellation.

The OneWeb satellite constellation has been affected by the bankruptcy of OneWeb but the project is going ahead.
Tweet
Tags: OneWeb Starlink SpaceX
<Apple's luxury luggage tag costs $449 >Free-to-play games on Xbox no longer require Gold subscription
Previous Next