Nokia 5.3 finally gets its Android 11 update 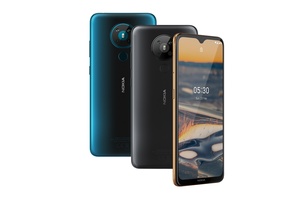 Once the champion of speedy Android updates, the rollout of Android 11 has been a struggle for HDM Global who manufactures Nokia branded Android phones. After missing deadlines one after another, Nokia 5.3 finally gets its official Android 11 update.
Many people have reported that Nokia 5.3 is finally getting its Android 11 update through an OTA update. Originally the update was supposed to be delivered in H1 of 2021, so the timeline has slipped dramatically.

And according to a site that tracks Android's promised updates, there are still several Nokia models that are waiting to get the Android 11 update that HMD has promised for them.

As Android 12 release date approaches, the users of slow updating manufacturers have been frustrated. It is not just Nokia, but also Xiaomi's Android 11 rollout and Motorola's Android 11 updates have been slow.

As the list of phones that should get Android 12 grows, many people stuck with 2019 Android 10 might move away from manufacturers that seem to be delivering the updates late.
Tweet
Tags: Nokia Android 11
<Google reveals new Pixels ahead of release with first Google-designed Tensor chip >Does dark theme really save battery? Study shows it does, but only if certain criteria is met
Previous Next
Comments have been disabled for this article.