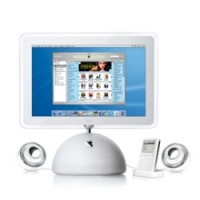 Apple's iTunes music store seems to continue to dominate the legal music download sector, despite ever-growing competition in the market. iTunes' director of marketing, Peter Lowe, told today in Music 2.0 event that Apple has now sold over 20 million music downloads through its service since its launch in April.
Interesting fact that he revealed was that 45 percent of all music purchases were made by purchasing a full album, putting in shame the loud complaints from various artists who don't want to see their music to be sold in single-track basis.

Apple also announced that its official goal is to sell over 100 million songs before next year's April. This would mean that the current sales levels would have to be increased quite dramatically. To help the company achieving this target, Apple has already signed various promotional deals with likes of AOL and Coca-Cola. Apple also has plans to launch a service in outside United States, but the schedule for such launch is not clear yet.

ooo.. at 1$ per song and 60% royalties to RIAA... theres 12 million dollars to the grandpa-suing corporate machine.