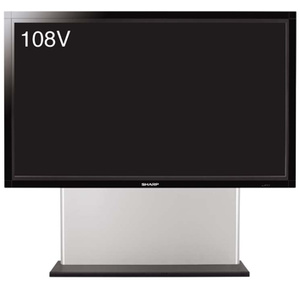 After announcing the TV late last year, Sharp has finally begun selling the largest single panel HDTV on the planet, the LB-1085's which stands at 108 inches diagonally. The company says the display is designed for public, outdoor use, and has a rich picture that at 1080p results in 76 million colors. In comparison, most commercial LCDs reach almost 17 million.
As is standard with all Sharp displays, the LB-1085 will have three HDMI connections, dual component inputs, one S-video, dual RCA connections, and computer input through both a DVI video port and a minijack input. For sound the TV is equipped with dual 15W speakers under the monitor.

The TV will go on sale in Japan in early July and already has one buyer, the Shinjuku Piccadilly movie theater. Other countries including the US will have soon have the chance to purchase the TV, for approximately $101,000 USD but it was unclear whether the build-to-order TV would be sold to individual customers or just companies.
Tweet
<Nintendo dominates US console hardware sales for May >Warner Bros. adds content to online distributors
Previous Next

I can get a top of the line projector for less.

You could buy 4 50" monitors and the computer power to sync them up as a single display for much less.

Originally posted by ThePastor: You could buy 4 50" monitors and the computer power to sync them up as a single display for much less.

I'm actually surprised. I thought it was going to more accessible to average consumers. The purpose of it makes more sense now.

Originally posted by iluvendo: I can get a top of the line projector for less.

But projectors only work in dark rooms... You can't "project" black (or dark colors) onto a white or silver screen!
813.6.2008 20:34
xveryx
Send private message to this user
Newbie

Wow for 101,000 thousand dollars u think they coulda used that extra 1000 to put better than 15w speakers n there.

That is just ridiculous. I wouldn' even pay that much it was atleast 4320p. Not to mention it can't be hung-up on the wall, and has only 2 15W speakers. In a few years or less we will have way better TV's than that for a MUCH lower price, say between 2k-5k price range. With that money would you rather buy a Audi A8, or a TV that will be useless in a few years?


On a more serious note, as others have said you could almost have a top-of-the-line (or very near it) room with a projector for that money.

If it was my money I'd buy a Viper and keep the change for insurance and gas.

Not needed!
Anyone who wants bigger image would get a 1080p Projector $2500. There you go, saved ur self $98.500.
For these who say "but it wont work outside", i get say that no TV looks good on a shine day out side. and i'm sure you would just be watching movies and play games on that anyway, so why you need to go outside? Sorry you can't watch ur news on a 108" is just wrong... LOL

Pffft...pardon me use of abrasive consonants but EFF that!

lol at that point why not build a home theater???

much cheaper! and upgrading it would be easier!

Here's an idea: Get a 50" Kuro and just sit half as far back from the display as you were going to with the 100+K rip-off set...Presto, same resolution and "perceived" size.