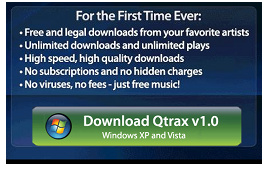 For many people Qtrax is probably still remembered as the free music service that didn't launch as promised last January because they didn't have the rights to offer any music. But with the demise of SpiralFrog last month it became the biggest name in label approved free music.
Yesterday they passed a major milestone by finally introducing the first full release version of their client software. Despite already having deals in place to offer music from all the major labels, their download client (based on the open source Songbird project) has remained in beta status. Today that changed as version 1.0 was released.

The new client doesn't offer any ground breaking new features. Like SpiralFrog did, it gives you access to music from the major labels that's free, but contains Microsoft DRM. You must be connected to the internet and using a Windows computer to play them.

Although Qtrax has claimed since last year that a Mac version, and even iPod support were on the way, they aren't making any promises about when either will be ready.

There's also no word on when Qtrax will be available outside the US, although that's slated for Qtrax version 1.1.
Tweet
<Microsoft acknowledges E74 error >Camcorder pirates busted recording Hannah Montana movie
Previous Next

I still remember clearly when Qtrax was first "released". After that I haven't had confidence in them. Even now I don't see any real progress other than getting 3 major labels. Which I guess is something, but still much is to be desired after they worked up the community to only be a HUGE upset.

free is no good if it's drm'd to death

I absolutely love this service, and have been waiting for a free legal music service since the napster days,I myself have experienced no tech glitches ,and downloaded the player within minutes and currently enjoy downloading songs from all 4 major labels and lots of indies. Anyone who is a true music lover ,and dosen't want to steal will whole heartedly embrace qtrax