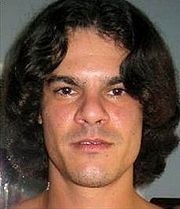 Christopher Scott, accomplice to the largest heist of credit card numbers, ever, has been sentenced to seven years in prison this week, following buddy Albert Gonzalez (pictured), the mastermind behind the scheme.
Gonzalez was convicted of stealing and reselling over 170 million credit and ATM card numbers, and received 20 years in prison for his role in over 20 counts of identity theft, wire fraud, computer fraud and conspiracy that led to $200 million in losses for banks, insurers and retail companies.

Scott was pegged as a "key lieutenant" to Gonzalez, with Gonzalez allegedly paying up to $400,000 to Scott for his services over the course of their years as thieves.
Tweet
<UPDATED: IsoHunt ordered to take down torrents, site likely to close >Record label EMI faces bank takeover due to debts
Previous Next

Is it me or does this guy look like "The Night Stalker"?

Originally posted by o0cynix0o: Is it me or does this guy look like "The Night Stalker"?

yeah big time.
Comments have been disabled for this article.