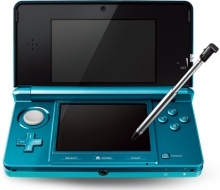 A few analysts have estimated today that Nintendo sold 750,000 3DS handhelds in March, after the device went on sale on the 27th.
Wedbush Morgan's Michael Pachter had a lower prediction, however, putting sales at just 500,000.

Doug Creutz of Cowen and Company says the 3DS will soon become a "stabilising factor" in the market for handheld gaming consoles, which has been declining for quite some time now.

Pokemon Black & White, the latest in the blockbuster (understatement) franchise is expected to have moved up to 3 million units.

The NPD Group will reveal all the official data on Thursday. The struggling U.S. market is expected to see another fall, year-over-year.
Tweet
Tags: Sales NPD Nintendo 3DS Handheld PSP US
<Angry Birds is now top-selling PSN game, ever >Windows 7 surpasses Windows XP in share, in U.S.
Previous Next Write a comment
Comments have been disabled for this article.