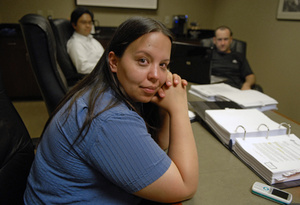 If the jury can define "distribution" as the RIAA wants it, it will likely result in a third trial.

Here is the backstory:

In 2006, Jammie Thomas-Rasset was sent a letter asking her to settle (for $3300) over alleged unauthorized file sharing of 24 tracks.

She refused and decided to take the case to court.

In 2007, Thomas-Rasset was found liable for $1.92 million in damages, but a retrial saw the fine dropped to $220,000. In 2010, however, a judge reduced the award to $54,000. The RIAA told Thomas-Rasset that they would accept $25,000, if she would agree to ask the judge to remove the decision from the record. She did not accept the terms of the deal and the trial went to part 3. Later that year, Thomas lost again in court, with a jury finding her liable for $1.5 million in copyright infringement damages. The Minnesota woman appealed.

in July, the judge reduced the verdict to $54,000 again, calling the original jury award "appalling."

I would think the next court will be asking RIAA why they have appealed and to prove why she should be paying more for the songs.

IMPORTANT: If you hate Sony for being so corrupt, copy this image into your signature too!
323.8.2011 07:24
KillerBug
Send private message to this user
AfterDawn Addict

Yeah...because the fine is only about 2.5 years wages for her; I'm sure she will just shrug it off and go back to doing what she was doing.

Actually, come to think of it, she will probably be pirating music again regardless; she can never pay for it again.
423.8.2011 11:15
plazma247
Send private message to this user
Member

Reading the back story anyone would think the RIAA managed to pick their own or influence the judge when they appeal.

I would imagine this appeal going no where at this point. Like how many times has this case been appealed? Sooner or later the judge is just going to ream on the RIAA for wasting tax payers $.