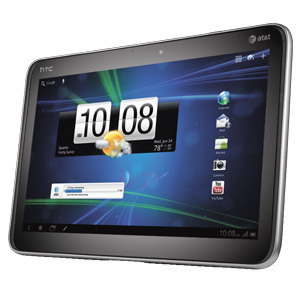 AT&T has announced that the first tablet with Android 3.1, the HTC Jetstream, will hit the carrier next week.
The 10-inch tablet (with 1280x768 resolution) weighs 1.56 pounds, runs on a dual-core 1.5GHz processor, has 8MP and 1.3MP cameras, 32GB internal storage and 4G support.

Furthermore, HTC says the device will have the popular Sense UI overlay.

Going on sale on September 4th, the tablet will cost $700 with contract or $850 without.

Specs are nice, price will be it's ultimate failure, I would not even pay half that for this. Plus being on AT&T will solidify it's complete and utter failure, just watch...

Any word on a 16 gb wifi model? Id rather just pop in an SD card for the extra storage if needed.