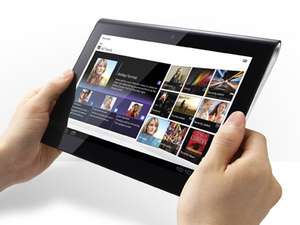 Sony has now shown off the specs of the Tablet S, set for release this month.
The tablet has a 9.4-inch screen, a "magazine" form factor, a Tegra 2 dual core processor, dual cameras and Honeycomb.

The tablet comes with either 16GB or 32GB of internal storage, DLNA compatibility, an IR port (to use as universal remote), an SD card slot, Sony's Crackle and eReader apps and Sony's "QuickView" tech for faster browsing.

Finally, the tablet is the first to be Playstation Certified which means it can play PSX games from the PS Store.

I'm sure Apple is just waiting to sue Sony now.