Winamp finally makes it to Mac, in early Sync Beta 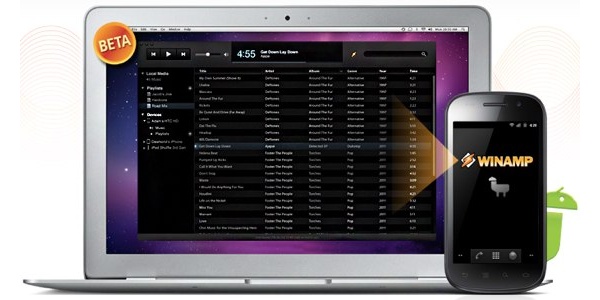 Winamp, made popular in the late 90s as a light media player with a heavy feature set, has finally made its way over to Macs.
The Winamp for Mac Sync Beta is the first ever version of the software to hit Apple products but it is very light on the features.

As a "Sync Beta," the software will focus on the wireless and wired syncing abilities of music and playlists to Android devices.

Of course, the software will do its basic job of playing music just fine.

Nullsoft, the company behind the product say they have a "new long-term commitment to the Mac OS platform," and will be updating features regularly.

You can download the software here: Winamp.com/Mac
Tweet
Tags: Mac Winamp
<Droid Razr to be released at 11:11 on 11-11-11? >Rumor: Amazon's second tablet will have 8.9-inch screen
Previous Next

Actually, Nullsoft had MacAmp back in the late 90's, but that was PPC Macs, pre-Mac OS X.

Does anyone still use winamp then, i stopped using it way back as they never updated the playback engine to support up-scaling from lower sample rates and swapped to XMPlay. It makes the world of difference to playback when your play a 44khz 16 mp3 on a sound card that does 24bit 192,000khz .. ok winamp did have the mad audio plugin, but that commonly struggled with many mp3 files..

Does anyone remember sonique player... that sounded fantastic (exceptional decode engine for the time), shame they got bought up and then canned.

Being such a whiner about sound quality myself I use foobar... winamp was fine for a while, but then the plug-in playground started to really get annoying with all the armatures screwing up the works. I just got tired of being everyone's beta testers.

As I believe plazma was hinting at, winamp also had issues with playing files of different sampling rates as well. So long as your list contained samples of a similar frequency rate you were fine, but if it varied much, winamp would crash. At least their earlier their earlier iterations did this. I'm sure the later versions addressed the issue, but I simply wanted much more control over my music than winamp was/is willing to do.

I still use Winamp, mainly for milk drop and enhancer..been using since at least early 2000s and haven't changed lol

AfterDawn News
AfterDawn Guides
One of the largest collections of software on the Web: AfterDawn Software Section
66.11.2011 17:23
plazma247
Send private message to this user
Member