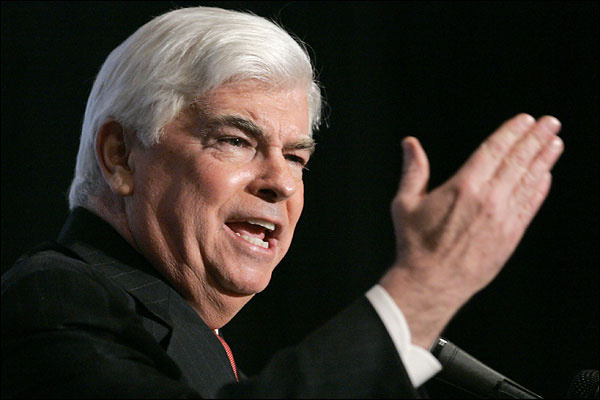 SOPA and PIPA may have been dealt a setback by last week's widespread protests, but neither has been withdrawn completely. Likewise, opponents of overreaching anti-piracy legislation continue to speak out.
No individual has received more attention than Wikimedia's Jimmy Wales. Wikipedia was certainly the biggest website to go dark on January 18 in protest of the two bills. While the decision to join the blackout was based on widespread community support, it was Wales who got the ball rolling last year, and ultimately the choice was in his hands.

MPAA Chairman, and former US Senator, Chris Dodd responded to the blackout by calling it "an abuse of power." Later he appeared on Fox News and blatantly threatened to cut off campaign funding for politicians over their opposition to the bills.

Speaking at the Digital Life Design conference in Munich, Wales responded to the MPAA rhetoric. He said of the protests "that?s democracy," adding that Dodd "had best get used to it." He then went even further and suggested the MPAA should fire Dodd.

Wales' position on Dodd mirrors a comment by Brad Chase of CBS News last year. Ironically, Chase made that suggestion in an article suggesting the government needs to do more about piracy. At the same time, he noted Dodd "has done everything possible to widen the rift between Hollywood and Silicon Valley."

The MPAA stance on SOPA and PIPA has softened in the wake of the protests. In a statement last Friday, Dodd made an appeal for "a sincere discussion about how best to protect the millions of American jobs affected by the theft of American intellectual property." Of course they took the opposite position when they thought they were on the winning side.

Opponents point to the DNSSEC code and claim that it is not compatible with the site blocking or filtering technology envisioned by H.R. 3261. This argument conveniently ignores not only the history of the creation of DNSSEC but also the very nature of Internet protocols, which is simply this: when new developments or circumstances require changes to these codes, the codes change. Any software engineer will tell you that no development process stops at version 1.0. Today is no different.

Firing Chris Dodd is unlikely to make any substantial difference to MPAA policy. It's not as though their lobbying efforts or rhetoric started when he was hired last year. On the other hand, it's hard to remember another MPAA representative as oblivious as Dodd is to his own public image.
Tweet
Tags: MPAA Wikipedia Chris Dodd SOPA PIPA
<iPad and Mac sales push Apple past HP as the top computer brand >Here are the rumored Xbox Next specs
Previous Next

of course Dodd has done everything to fan the flames because if there wasn't piracy then who would pay this idiot any money or attention. He is the quintessential abuse of power. His mug shot should in Webster's for being an ass. Its like this the rich are calling for the government 's of the world to step in so they can help stop piracy.. well there's a better way. how about we all say going to the movies is worth 7.00 per and piracy is costing the 5.00 per then they are only making 2.00 per well wouldn't it better to make 4.00 per person from online viewing or rental or dvd and be happy instead of bitching and winning about lost revenue and wanting to take it off their taxes for the year .. and just lower the price to where its cheaper to pay for it ,then burn it or take a chance of getting caught stealing it off line.. maybe its not the piracy at all Hollywood maybe the movie was crap to start with not all ideas are good ones, some just suck like alot of movies as of late and the world has shown that we will pay look at C.K.Lewis and the cool million in 10 days or so.. maybe it time for a new model...

I'm not exactly sure how to take Jimmy Wales' comment. It certainly is the most underrated, diluted criticism to date that's for sure.

Wow... 'fire' a rich, blow hard, schmoe that has openly admitted to tampering with judicial & electoral process; not to mention he was also in a dead heat to basically shut down your own company like the mental faculties of a 12 year old rape victim and the best you can can come up with to publicly sodomize this ass tramp with is 'fire him'?

Let's just say if I were on a committee commissioned with obtaining spokespersons for the defense AGAINST legislation like SOPA; I certainly wouldn't be looking for Jimmy Wales as an immediate candidate.

im sorry but he is doing what the public is so upset about in government
using the money to change the course instead of finding a new person to back that has his same views.changing minds in government is based on public outcry and of unfairness not a threat of the withdraw of funds as tool to scare political representative to go against public outcry of unfairness

Take a good look everyone, it's old blue haired f*ckers like this that are trying to censor the internet for big business. This idiot couldn't explain to you how he has an email address let alone understand what he's being paid to "vote" on. Maybe we'll get lucky and he'll go hunting with Dick Cheney.

Chris Dodd should've stayed in politics, where clowns like him belong.

My comments are about the MPAA and the industry as a whole. Most movies that come out each week are "B" grade or less. If I were to see these movies in a retail store, I wouldn't buy them unless the price were very low and I'm talking $2 to $3 dollars. There have probably been only 200 or so movies in the last 10 years that are worth buying because you might want to watch them more than once. That's the only thing that makes them worth buying. The majority aren't worth watching once so, you are not wasting too much money at a buck or two for rental. The movie industry isn't loosing money to piracy, it's loosing money because they're making crap movies that no one want's to watch and the only way they get out there is through the cheap vending machine rentals. Sure, the big name movies, the ones you want to watch are probably being pirated but, they would drop the price a few bucks so most working people could afford them, they would make the money back in volume.
Chris Dodd is a politician,nuff said.The MPAA and the RIAA are out to get money for nothing by suing everyone and that is just despicable.
As far as music goes, I like mine uncompressed so, I buy the music I like on CD. When the music sites start selling full, uncompressed format music at a resonable price, they'll get my business. If I want MP3's, I'll convert them myself in whatever bitrate i want and play them on what ever device I want. That goes the same for movies. When the bandwith is finally wide enough that movies are downloadable at full uncompressed format and at a resonable price, they'll have my business, until then, I'll buy the DVD's that are worth buying and rent the rest.
Notice to MPAA and RIAA, Get Your Heads Out Of Your Asses.

"Of all the things I've lost, I miss my mind the most"
Comments have been disabled for this article.