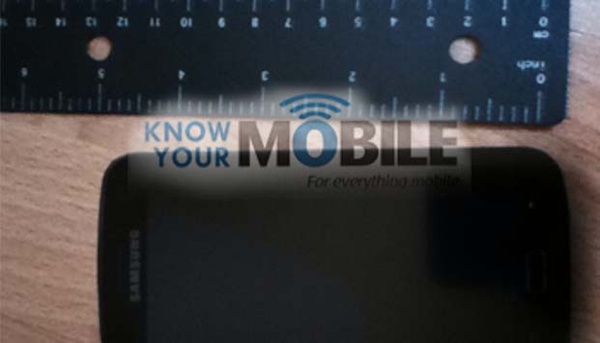 Knowyourmobile has posted an unconfirmed picture of the upcoming Samsung Galaxy S III, which they claim will have a 4.8-inch screen.
If accurate, the screen will be one of the largest seen yet on a smartphone, larger than the Galaxy S II and the Galaxy Nexus but smaller than the massive Galaxy Note and its 5.3-inch screen.

Earlier this week, Samsung showed off the processor that will run the next phone. Called the "Exynos 4 Quad," the chip runs at 1.4GHz per core and is based on the ARM Cortex A9 SoC. The processor will be first seen in the upcoming device, and is currently being sampled by other major phone makers for phones into the future.

Additionally, the phone is expected to have 16GB of internal storage, and a massive 12MP rear-facing camera.
Tweet
Tags: Samsung Leak Galaxy S III screen
<Kindle Fire is now over 50 percent of all Android tablets >Mozilla killing off Firefox 3.6 with auto-updater
Previous Next

bigger by the year

Soon we'll be toting around 19" screens on our backs just to keep up with the ever increasing screen size phones.

Originally posted by nightfly: Soon we'll be toting around 19" screens on our backs just to keep up with the ever increasing screen size phones.

For me to confirm it worth while, I need: T-Mobile, 4g, minimum 32gb internal, prefer 64gb for sure, will wait past the first wave for issues, must have ice cream, and confirmed root... otherwise... pass!