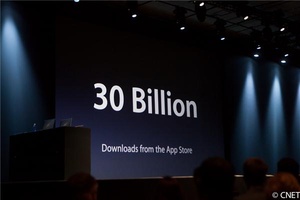 Apple CEO Tim Cook has revealed some facts about the iOS App Store today during WWDC.
There are now over 400 million App Store accounts, thanks to iPhone, iPad and iPod Touch users.

The store has 650,000 apps, and users have downloaded 30 billion apps since inception.

Developers have been paid $5 billion since the Store's open, added Cook.

App downloads are moving at a very fast pace, since Cook announced in March that the 25 billion milestone had been hit.

most do not break even he left that bit out.