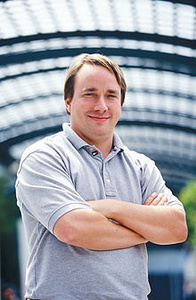 Linus Torvalds, the Finnish-born chief architect behind the Linux kernel (and project coordinator), had some choice words for Nvidia this week.
Nvidia does not support Linux with its Optimus technology, and that makes Torvalds not a fan.

The developer called Nvidia "the single worst company we've ever dealt with" and then dropped the F-bomb alongside with gesture using a certain finger.

Furthermore, Torvalds seems pissed that Nvidia and their Tegra line of processors are selling so well because of Android, the OS that is based on Linux. Fortunately, Nvidias stance is "the exception rather than the rule."

Here is the full video, it's long but the reason you are here is at the 49th minute:

If one is incapable of locution without expletives, then disrespect is properly earned.
If someone treats me badly, I do not return it to them.
However, I do treat them as they treat themselves.

And you should be banned for saying that. I can't tell you what you should go do to yourself because I'll get banned...........again..........but you can read between the lines you CONFORMIST!

it really is a matter of economics.to spend money on support for such a little used operating system is simply not good business.im a conformist i guess.hows the other working for you?