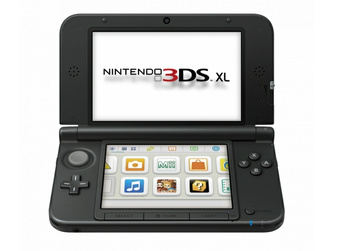 During this week's Nintendo Direct Conference, the gaming giant has introduced a larger version of their 3DS handheld.
Dubbed the 3DS XL, the console has a large 4.88-inch stereoscopic 3D top screen and a 4.18-inch second screen. The current (first-gen) version of the handheld has a 3.53-inch top screen and 3.02-inch bottom screen.

Additionally, the company is throwing in an extended battery which will give up to 6.5 hours of playtime per charge, depending on the brightness.

Nintendo will include a 4GB SD card, as well, larger than the current 2GB card offered.

All software from the 3DS is compatible and hardware included the charger.

The 3DS XL will hit retailers on July 28th in Japan and Europe and on August 19th in the U.S. alongside New Super Mario Bros. 2.
Tweet
Tags: console Handheld nintendo 3ds xl
<Analyst: Microsoft making its own phone >Report: Microsoft Surface to sell for $599
Previous Next

What I've Been Waiting For

Quote:Why did they not add an extra stick?

Quote:Why did they not add an extra stick?

why dont they let it exploitable
423.6.2012 18:05
ZippyDSM
Send private message to this user
AfterDawn Addict

So what will be the best hacking tool(like r4) for it? I want to play GB-GBA games and DS-3DS games off it,ect.