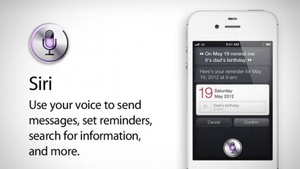 According to a new report by analyst firm Piper Jaffray, Apple's Siri virtual assistant works poorly, if at all.
This has been the general consensus amongst iPhone 4S users for some time, but the report is the first to say so much in a note to potential investors.

After performing 1600 common searches, the virtual assistant only accurately resolved the request 62 percent of the time when in a noisy environment and 68 percent in a quieter setting, like being at home.

The report gave the tech a "D" (on an A-F scale) for accuracy.

Says analyst Gene Munster: "You're playing the lottery when you're using Siri. They have a plan to be more competitive, but it's going to take a couple of years."

Voice recognition (such as Siri) has a loooooooooooooong way to go.
My brother couldn't get Siri to respond to a simple question like "Where is the nearest pizza place...".

Originally posted by ivymike: Voice recognition (such as Siri) has a loooooooooooooong way to go.
My brother couldn't get Siri to respond to a simple question like "Where is the nearest pizza place...".

Yes, it's true. Unfortunately, I had the same issues with Samsung's new S-Voice, as well.
AfterDawn News
AfterDawn Guides
One of the largest collections of software on the Web: AfterDawn Software Section
330.6.2012 20:26
ivymike
Send private message to this user
Member

AI simply doesn't 'get' slang, innuendo or gestures. Where picking your nose is today's taboo may be tomorrow's "I love you". Programming a machine to keep up with this intangible shit is a human impossibility, much less a mechanical one.

I suppose if we use ivymike's example of 'pizza place' & said 'pizza restaurant' instead, maybe both recognition softwares would have fared better.

But then people would have to fall back into speaking more formal versions of their given dialect in order to use their high tech 'speak & spells'. Upon observing that - with some of the gutter speak rolling out of some people's mouths it's amazing anyone can understand them at all. Which leads me to believe they're the ones bitching the hardest that the phone can't understand.

I guess the Eschaton isn't so immanent, after all o.O' ...

My Dragon Voice recog on my MyTouch 4G is 98% on point. Perhaps it doesn't understand ebonics, heavy accents or incomprehensible gibberish like so many utter all too often. Seeing the way most type on here.......if you all speak like that then it's no wonder.

However, Siri is garbage. Always has been and always will be. Perhaps getting to your destination 62% of the time is ok.

According to Woz himself, Siri has gotten worse since Apple bought it. It really should be able to figure out that if you said pizza you are looking for food...what else would you be asking?

Really brilliant people work for years developing this technology so somebody's brother can order a pizza and soda.

Strange, Google's Voice Search (which can be used for all speech to text input in any Android app) comprehends slang just fine for the last +/- 2 years that I've been using it, mostly for "voice" texting, trip navigation, and internet searches. Slang is simply a matter of a properly populated dictionary file.

Pity that Apple is apparently more focused on hiring Hollywood actors for Siri commercials (which do nothing but make the actors look bored and lonely) instead of putting money into better development of this alpha (judging by the Grade of D) service.