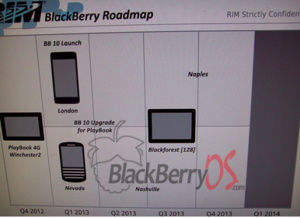 According to a leaked roadmap, RIM has 5 devices planned for 2013.
Each of the new devices will run on RIM's BlackBerry 10 operating system, which was set for release late last year but instead has been delayed until 2013.

The company's fortunes and hope lie in the arms of BB10, which is expected to bring RIM to at least on par with Windows Phone in terms of features. It is not expected to be able to touch iOS or Android in capabilities.

For the Q1, two BB10 smartphones are on the roadmap, "London" and "Nevada," the first of which will be touchscreen while the latter has a full keyboard.

RIM's successor to the failed Playbook tablet, codename "Blackforest," will hit in the Q3.

Still alive .Hope succeed
I'll be here waiting to see the BB10 in action and as i can see promise to be a great improvement.
just remember for applications that people are looking for.

I fully understand RIM wants to ensure the Blackberry 10 is flawless and performs as expected when released, but delaying it to early Q1 2013 may not be the best decision in my honest opinion. The reason is, RIM will miss the massive Christmas Holiday shopping season.

Obviously I am not familiar with the reasoning behind the delay, though if I were the CEO I would allocate enough resources to ensure its availability by Christmas.

It seems they will be working hard to fully complete the BB10 in a flawless nature, and start manufacturing the new smart-phones in time for a massive Q1 2013 release. Hopefully this turns heads and helps RIM claw back market share. Competition is a good thing, and I don't like seeing Apple & Google as the only alternatives. We need RIM to succeed and get back to business.

So true BB must launch for christmas 2012.