Recent headlines | Google, Spotify and many other major websites are all down across the globe 3
AfterDawn > News > Tim Cook apologizes for Apple Maps failure 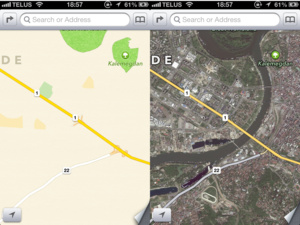 Apple CEO Tim Cook has apologized to customers today for the failed Apple iOS 6 maps software.
The exec even encouraged users to seek out better alternatives from Google and Bing.

Cook says the company is "extremely sorry for the frustration this has caused our customers." The mapping software "fell short" of the company's normally high standards and he promised a quick improvement.

Added the CEO: "While we're improving Maps, you can try alternatives by downloading map apps from the App Store like (Microsoft's) Bing, (AOL's (AOL) MapQuest and Waze, or use Google or Nokia (NOK) maps by going to their websites and creating an icon on your home screen to their Web app."

Apple removed Google Maps, the golden standard of the industry, with its own software during the launch of iOS 6 on September 19th.

The new Maps app has quickly become infamous, however, due to its incorrect directions, incorrect locations, and blurry or incomplete maps and points of interest.
Tweet
Tags: Apple Tim Cook Maps ios 6
<Nokia slashes prices on older Lumia devices >BlueStacks partners up with AMD to bring Android apps to PC
Previous Next

What they need to do is assign someone to watch over their products like Steve Jobs did, when he was alive. They also need to empower this person to have complete control on the different aspects of their product development. And they should base this person's compensation on a successful product launch, in order to better align their interest with that of the success of the company and its product launches. As it stands now, it seems that further development is governed more by corporate politics, where everyone has their own agenda, as opposed to the project being driven by a person of authority, with one cohesive vision, and the ability and the herewith all to cull those ideas, features, and people that absolutely do not make the cut. If Jobs was still alive, the current maps that come with the iPhone 5 would not have been deployed.

The updates to the iPhone 5 were not that jaw-dropping. It seems to reek of corporate conservatism. If Apple is going to remain at the top of the heap, then they will have to "grow a set", and try new things. That's how they got to the top, and that's how they will remain at the top. Otherwise, they will become a company that just does what everyone else does, instead of being the ones that set the standard that everyone else *follows*.

CNBC's Jim Cramer on iOS maps fail-"If there is one thing that Steve Jobs hated more than Google, it was an inferior product." So, Steve Jobs has to be rolling over in his grave right now.

I actually applaud Cook and Apple for this in its entirety. One thing that Apple has done consistently right that other companies fall short on is admitting their failures. With their long list of successes, they have had quite a few flops, most of which they at least owned up to and shut down.

While Sony and Samsung continue to pour billions of dollars down the drain by trying to revive projects that died long ago, Apple apologizes to its customers and recommends competition. Apple might not even be so bad of a company if they stopped with the frivolous lawsuits.

On another note, I bet Apple will immensely increase the quality of its maps when it relaunches. They have $119 billion to dump into any project of their choosing. They could literally hire every tech out of Duke, Yale, and MIT to correct their sad Maps app in a matter of weeks. If they decide to actually spend their money on something useful, I can't imagine them just scrapping the whole Maps idea.

Apple Apologizes? This is a first.. I just thought I was driving wrong. I mean that is what I expected them to say and probably would have been said if Steve Jobs was alive because he could never admit failure.

Maybe, just maybe Apple can finally admit that they're human and do make mistakes after all. Perfectionism is NOT possible in this world we live in. Reality is that their's gonna be snags, delays, messups, and what not that can impede growth. It's how you master at overcoming those obstacles without screwing yourself or someone else is what's important to learn here.

Chance prepares the favored mind. Look up once in a while and you might learn something. - BLUEBOY
75.10.2012 20:21
ronatola
Send private message to this user
Junior Member

I bet some poor tech dev got pointed at and fired for this - even tho he was probably yelling it wasn't ready for prime time.