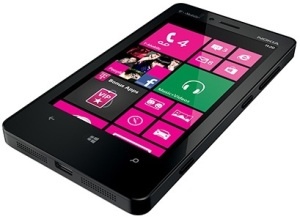 T-Mobile USA has announced its own exclusive Windows Phone 8 smartphone.
The Nokia 810, which will be a mid-range device, will be similar to the AT&T exclusive Lumia 820 announced last month alongside the flagship Lumia 920.

Unfortunately, the carrier hasn't announced the internal storage or whether there will be a microSD slot. Just like the 820, wireless charging will not be bundled but available separately as an accessory.

Additionally, the phone is missing the PureView camera tech but will come with all other built-in feature apps like CityLens and Group Shot.
Tweet
Tags: T-Mobile windows phone 8 nokia lumia 810
<Steam for Linux games list leaked? >Alleged iPad Mini to be Wi-Fi only?
Previous Next

Crappy service now meets crappy phones. Thanks tmo! All of this after reading about the 920 a few months ago.

Doesn't it look a bit like the iPhone 4 and 5? Sharp edges and flat sides? Do we smell an upcoming Apple vs. Nokia lawsuit? ;-)