Recent headlines | Samsung Android 12 update timeline - when your phone will get it
AfterDawn > News > Tracking Sandy: View these webcams to follow the 'Frankenstorm'

Tracking Sandy: View these webcams to follow the 'Frankenstorm' 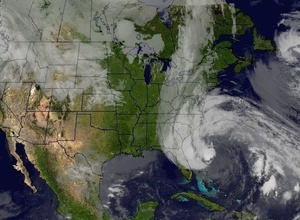 If you live on the East Coast of the U.S., you have no doubt been inundated by news about the incoming "Frankenstorm," Hurricane Sandy.
For those that live in New York and New Jersey, states of emergency have already been declared by the Governors of the respective states and even by President Obama, who has backed the states with aid and FEMA support.

A great way to follow the storm, especially if you live in the affected states, is through webcams that are situated at popular spots.

What does this have to with the storm on the east coast.

Originally posted by JST1946: What does this have to with the storm on the east coast.

You got it Bro.This isn't the only thread he has been Trolling.

good thing i read all the threads jst or i would have thought you were losing it.lol.

Nice and warm here in Texas.Glad I don't like in Michigan any more.

Hi
How is the situtation now in Newyork Newjersy etc after the sandy storm landfall?