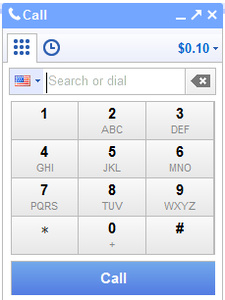 Just like they did last year, Google has announced it will extend free Gmail voice domestic calls.
The extension, which will also be for Canadian users, means Gmail users can make free domestic phone calls using the Gmail widget service for at least another year.

Google introduced voice and video chat to Google Talk in 2008 and launched the voice calling in 2010. The service was only supposed to be free until summer of 2011 but Google keeps extending it.

Says Google: "Many of you call phones from Gmail to easily connect with friends and family. If you're in the US and Canada, you'll continue to be able to make free domestic calls through 2013. Plus, in most countries, you can still call the rest of the world from Gmail at insanely low rates."

Gmail is one of the best alternatives to Skype, especially at the price.
Tweet
Tags: Google Gmail voice calls
<More movie studio employees caught pirating movies >Report: MP3 player sales fell by over 20 percent in UK in 2012
Previous Next

I really like using Google voice. I am glad they are deciding to keep it free.

Me too. but honestly, the second I have to pay for it I'm done.

I think I would pay a small yearly or monthly fee. Actually there are a couple of quirky things that happen with Google voice that will either cause the person on the other and to not be able to hear me or my call will suddenly be dropped. They don't happen often but they do happen enough to be annoying and a problem.

If I had to pay for it I would probably look for something similar that did not have the problems I mentioned above. Granted nothing is perfect.

i would pay for it the moment they have incoming calls as well as outgoing.sound quality is good and yes,although it drops calls sometimes,its still a pretty good service.

Have your Gmail email account open. I believe it has to be open in a flash compatible browser. I use Internet Explorer 32-bit


Once you have these two windows open you are ready to receive calls. The little window indicating an incoming call pops up in the bottom of the Gmail window just like it does when you call yourself from Google voice to complete an outgoing call.

cool i will give it a try.didnt think they were doing it in canada yet.

It has been like that for a while in the United States. I don't remember when but one day I just tried to receive a call and it worked.