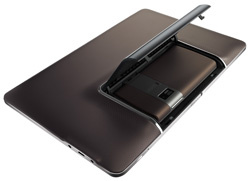 Asus is currently in talks with Microsoft in an effort to begin offering Windows Phone 8 devices.
The company, known for its PCs and tablets, has offered phones in the past but all were met with mediocre sales.

Smartphones, as an industry, are booming. Shipments rose 45 percent year-over-year, compared to a horrible 3.2 percent contraction in PCs, where the market has nowhere to go but down.

Asus has had discussions with Microsoft on introducing its next "Padfone" with Windows Phone 8. The padfone is a smartphone that docks into a tablet.

Says Benson Lin, Asus's corporate vice president of mobile-communication products: "With our Padfone concept, the phone plus tablet, I think it makes sense for Windows 8. There is no target timeline...but we are interested in making Windows phones."

Additionally, Asus, which has practically no U.S. presence except for its Google Nexus 7, is speaking with carriers in the nation to bring its phones to market this year.
Tweet
Tags: Microsoft Asus Smartphones windows phone 8
<Samsung preparing an iPad Mini challenger? >Fortune: Google the top place to work in 2013
Previous Next
Comments have been disabled for this article.