Ballmer: We aren't scared of Dropbox 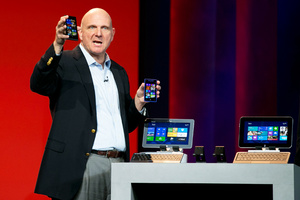 Microsoft CEO Steve Ballmer dismissed Dropbox today, while pumping the company's own SkyDrive cloud service.
The exec called Dropbox a "fine little startup" but claimed that its 100 million users are really "a pretty small number" compared to the amount of Office, SkyDrive and Hotmail/Live users.

Ballmer says the company's next goal is to move past 1 billion Office users despite the big time push from rivals like Google Apps.

Microsoft recently launched Office 365, a subscription version of Office, allowing customers to pay annual or monthly fees and not have to buy the software upfront.

The CEO also took a shot at the iPad (at least for time being), saying the company is not worried about any tablet that does not offer Office. Office for iPad and Android is expected later this year.
Tweet
Tags: Microsoft Dropbox SkyDrive Office 365 Ballmer
<Judge: Samsung did not willfully infringe Apple patents >Living Social continues to hemorrhage money
Previous Next

Apparently Ballmer thinks that having the equivalent of 1/3 the population of the US as customers is a bad thing.

I am far from a expert but from were I am sitting he has to go or Microsoft has a very bad road up and coming.

Originally posted by ThePastor: Balmer will be known in the future as "The Guy who Killed Windows"

You make a good point and I think it will remain the main OS of business for some time to come. The tablet and Desktop markets are likely to struggle the most.
531.1.2013 16:22
bloke2000
Send private message to this user
Junior Member

there is a fine line between arrogance and confidence and he crossed it by a mile.