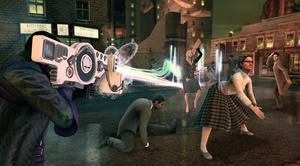 "A weapon designed to penetrate the anus of enemy characters and civilians constitutes a visual depiction of implied sexual violence that is interactive and not justified by context."

The Board also pointed out an optional mission in the game where the player obtained and smokes "alien narcotics," giving the character superpowers.

"In the board's opinion, there is insufficient delineation between the 'alien narcotic' available in the game and real-world proscribed drugs. The board notes that the label 'narcotics' is commonly assigned to describe a class of real-world drugs that include such proscribed substances as cocaine and heroin...this game therefore contains drug use related to incentives and rewards, and should be refused classification."

Volition is working to alter the game in order to bring it to the Australian market.
Tweet
Tags: Australia Saints Row IV
<Netflix' HTML5 player working in Internet Explorer 11 on Windows 8.1 >Dish Network withdraws their bid for Clearwire, allowing Sprint to purchase
Previous Next

So SR4 is banned but Destroy All Humans isn't?

What was the point of the 18+ rating if games still get banned? Like most modern day Western societies the Australian government loves to tell its citizens what they can and cant do.

Originally posted by pensfan12: What was the point of the 18+ rating if games still get banned? Like most modern day Western societies the Australian government loves to tell its citizens what they can and cant do.

A funny old world;political appointees who converse in Mission Statements and media approved PC cant, get to exercise power over the sheeple who appoint the politicians.

I thought the Australian government was against piracy?

Sorry got to agree with this.

i don't see whats so bad about the game that they have to ban it.

drug use big deal.i go for a walk on my street and i smell pot coming from peoples windows and yards.How come the movie ted isnt banned here or half baked isnt banned???

@killerbug the australian government dont actually seem very concerned with piracy at least not compared to usa and uk.