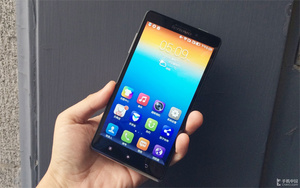 Lenovo has unveiled their Vibe Z flagship device today, following the launch of the Vibe X at this year's IFA event.
The Z has a metal body but a similar design to its older brother, and the company has said the phone is aimed at young adults outside of China.

For cameras, the device has a 13MP rear sensor with LED flash, and the front has an overkill 5MP sensor. Overall, the phone is just 6.9mm thick.

Pricing and availability were not revealed, but Lenovo did say Android 4.4 KitKat is on the roadmap.
Tweet
Tags: Lenovo Vibe Z
<Report: Apple to cut Samsung's share of iOS chip production >'New' Internet Explorer zero-day has been exploited for three months
Previous Next

could be a very strong competitor if stock android was used.

I HATE the word 'phablet'...........an irrelevant and gay term! Won't ever buy anything EVER labeled "Phablet"