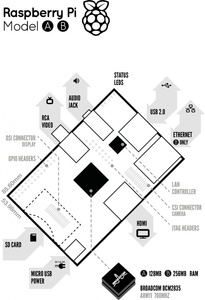 Ten months after announcing they had sold 500,000 units, the team behind the Raspberry Pi has confirmed that they have now reached 2 million sold as of the end of October.
The team says they had initially expected to reach the milestone by February of next year, so there was a "bit of a shock" when it was hit so early.

Raspberry Pi devices are mini-computer created by UK programmers that sell for $35. What makes the computer so impressive (besides its price tag) is the fact that it can play 1080p HD video with no issues. The devices are intended to promote the teaching of basic computer science in schools or at home. The company is looking to promote the Python programming language, alongside Basic and C among others.

For your $35 you get a 3.3-inch wide board with a 700 MHz ARM11, 256MB RAM, HDMI-out, SD card slot, a USB port, ethernet, audio jack and Broadcom VideoCore IV GPU.
Tweet
Tags: Raspberry Pi
<Did Apple buy 3D sensor maker PrimeSense for real this time? >Qualcomm's Toq smartwatch is here, priced at $350
Previous Next

The only issue is the SD card slot.....You have to be careful sticking the card in.

The only issue is the SD card slot.....You have to be careful sticking the card in.

You can get a microsd card to sd card adapter sold by adafruit to make the card only stick out a very small amount ^^.
Carpe Noctem
319.11.2013 10:37
Bozobub
Send private message to this user
Senior Member

Props to the Raspberry Pi devs! They accomplished exactly what they set out to do, just a few orders of magnitude better than they expected xD . And even then, they didn't let their surprise success swamp them.

Empowerment and education of the masses for a pittance; right on.

that is damn impressive, no surprise!