For some reason, Barnes & Noble is releasing a new Nook tablet 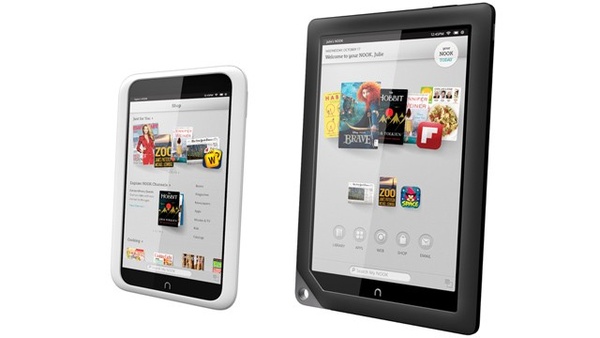 Even though sales have fallen off a cliff and the entire Nook division is failing, it appears Barnes & Noble will still be releasing a new tablet.
The new tablet will not be built internally, however, as the company works on deals with OEMs.

B&N reportedly fired a significant amount of its Nook team earlier this year and during their recent earnings call confirmed that "staffing levels in certain areas of the organization have changed."

As with all of B&N's previous hardware tries, the company is really just aiming to sell more books that can be read through the excellent Nook app. The company had just $57 million in digital content sales, down 27 percent year-over-year from already dropping numbers.
Tweet
Tags: Barnes & Noble Nook
<BlackBerry launches sub-$200 smartphone >Original 'Minecraft' hits 100 million registered users
Previous Next

It's the company's last ditch effort to remain "relevant".

Not gonna happen. THey will be known for books and books only. Not E-readers or coffee or technology.....BOOKS!

I am VERY surprised at this story! It's a miracle that B&N is even still functioning as a "storefront company", since they announced 200 closures a scant year ago. Add that to January's CNET article about closing the book on the Nook, and you can see why I'm having a hard time wrapping my head around this.

Don't get me wrong, I really enjoy going to B&N or BAM and browsing the selection of books (guess that's because I've been frequenting bookstores and libraries since I was a child), but I honestly can't tell you the last time I was in a library, and I no longer have the room or desire to carry with me hundreds of books at a time.

Also, my future niece received a Nook for Xmas 2012. It died within 6 months, and the customer support she got was nothing short of rude and abysmal...they actually hung up on her when she called about the eternal boot loop: I believe she's since recycled it and purchased a Kindle.

Bad move for B&N..hope they don't sink too much $ into the new Nook...

Originally posted by hearme0: It's the company's last ditch effort to remain "relevant".

Not gonna happen. THey will be known for books and books only. Not E-readers or coffee or technology.....BOOKS!

you know you kind of have to know how to read before you comment on something like this.i,personally like to hold a book in my hands an actually turn the pages.i usually read about 60 pages an hour or more on any given book.as well i retain what i read so i would carefully think of being relevant yourself.please dont mistake my lack of the use of capitals for ignorance in this matter.there is an old saying:if you have nothing of consequence to say,shut the hell up.

I bought a nook, and was hoping to like it. Granted I wanted to do more with it, have a couple of apps for him to play educational games with, etc. It's locked down OS prevents you from going to google play and downloading non nook apps. Annoying! I could have hacked it, but whats the point? My $99 tablet from Walmart does more, and could install a Kindle or Nook app to read books from. Personally the Ereader they have that looks like paper will probably be their biggest seller, competing with the Kindle Paper White. Good customer support will go a long way. As far as the previous comment, B&N is one of the last B&M bookstores left. They should capitalize on that. Amazon is more established, with a better reliability rate for tablets. So yes, it's relevant.