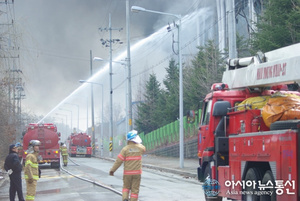 Samsung has denied that a major fire at a factory in South Korea will lead to less supply of the upcoming Galaxy S5 at launch.
The factory in Anseong was being used to manufacture PCBs (printed circuit boards) for the new flagship.

Damage has been estimated at nearly $1 billion and it took over 280 firefighters to contain the fire. The fire began Sunday morning local time, and burned through equipment and components. It took about six hours to put the fire out.

Samsung has said the fire will not affect the April 11th launch of the device, and the company uses other PCB factories, as well.

Availability in certain smaller markets could be affected still, but most likely you will not have to worry.
Tweet
Tags: factory Samsung Galaxy S5
<Sony, Panasonic unveil Archival Disc format for massive long-term storage needs >Google Chromecast going on sale globally in coming weeks
Previous Next

They should be okay, if people are smart they would just buy a s4 instead because there isnt any real major improvements that would really make them need to make the jump to the s5. I mean you can hardly tell them apart.