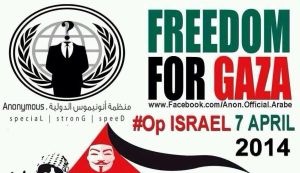 The infamous hacktivist group Anonymous has launched another attack on the Israeli government, a year after their first such attack.
Under the group name AnonymousOpIsrael, a number of Israeli government websites were attacked, including sites for the Israeli Education Ministry, the Postal Service and the Central Bureau of Statistics.

The group, which is pro-Palestine, also posted threatening messages on YouTube demanding that our "brothers and sisters to hack, deface, hijack, database leak, admin takeover and DNS terminate the Israeli cyberspace by any means necessary."

AnonymousOpIsrael says the attack was retaliation for alleged "crimes against humanity" by Israel against the Palestinian people.

This is the price for their 'apartheid' policies.