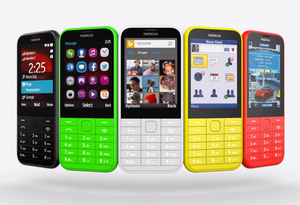 Nokia has unveiled its new 225 phone for the emerging markets, a device the company calls its "slimmest Internet phone" to date.
Selling for just EUR39 ($54), Nokia is making the device available in five colorways starting in the Q2.

The phone has a 2.8-inch screen and will come pre-loaded with the company's Xpress Browser, which is based in the cloud and helps to optimize sites for speedier performance on 2G/3G networks. The phone has a 2MP camera, a microSD slot, a dust and splash proof keymat, and dual band 900/1800MHz network support.

In addition, the device will come with Facebook and Twitter apps and five older games: Block Breaker 3, Asphalt 6, Assassins Creed 3, The Avengers and Real Football 2012.

Nokia has promised single and dual SIM models and up to 36 days of standby time. The operating system is Series 30+, meaning Nokia has stayed away from Windows Phone here.

It's nice to see someone make a quality basic phone. Most of them are complete garbage lately

You're probably going to be seeing a lot more. The high-end market is pretty much saturated.

I agree, this is nice.

Quote: In addition, the device will come with Facebook and Twitter apps and five older games: Block Breaker 3, Asphalt 6, Assassins Creed 3, The Avengers and Real Football 2012.

This device can use some improvements right out of the gate if it is targeted for countries like India, which might be the second largest market in the world.

I have 6 different systems that connect to the internet but I absolutely refuse to use Facebook or Twitter. There a whole lot of people like me. What they might be better off doing is adding support for Viber. I would also suggest Whatsapp but that application insists on residing in the main memory and can't be moved to sd card. There are a whole lot of people with Samsung phones which sold for around $100/= with less than500 mb of ram. I was one of them starting off on my first Android device. I simply could not update Whatsapp because I always ran short of memory. I always had to uninstall and re-install the application. No such problem with Viber. Free messaging the second largest use of mobile phones in India.

When will it be available in the USA?

Originally posted by buzmeg: When will it be available in the USA?

I agree that you're probably correct, DVDBack23, but I'm not certain. I think these kinds of devices have at least some potential for the "I hate smartphones" types, if nothing else.