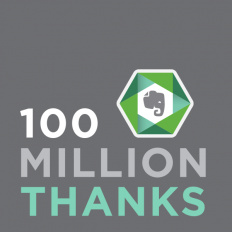 Both are pretty inspirational!

When we launched the Evernote service in 2008, our intuition was that the world was about to go through a big change in how people worked. There were many note takers and productivity tools around at the time but they all felt out of date; they were becoming less and less relevant to people's lives.

We set out to redefine the meaning of productivity for modern busy people. We want Evernote to become your workspace; the place where you do all of the everyday things that keep your life moving forward.

Tweet
Tags: Milestone evernote
<Yahoo acquires and shuts down another startup's app >Should Microsoft have unbundled Kinect from Xbox One?
Previous Next
Comments have been disabled for this article.