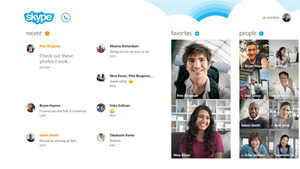 Skype has said this week that it will be retiring all older versions of its desktop application, including versions for Mac and Windows that were released as recently as February 2014.
"We are going to retire older versions of Skype for Windows desktop (6.13 and below) as well as Skype for Mac (6.14 and below) over the next few months," Skype said. This makes upgrading to the latest versions mandatory if you want to keep using Skype.

While it is not out of the ordinary for companies to retire older versions and force updates, it is not normal to see versions released just four months prior being added to the list. If you are up to date, you would have 6.16 on Windows and 6.18 on Mac OS X.

What will happen once the retirement occurs? "Once a version is retired, users will no longer be able to sign into the retired version until they upgrade to the latest version of Skype," a Microsoft rep noted. Microsoft acquired Skype in 2011 for $8.5 billion.

Source:
CW
Tweet
Tags: Microsoft Skype mac OS X microsoft windows
<How The Weather Channel knocked Yahoo Weather off the iPhone >YouTube, Netflix headed to some cable set-top boxes around the globe
Previous Next
Comments have been disabled for this article.