Recent headlines | End of an era: iPod discontinued - the device that revolutionized music industry
AfterDawn > News > Consumer Oculus Rift VR headset could begin roll out by summer of next year 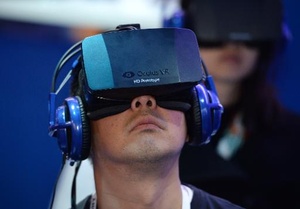 According to multiple source, Oculus VR could begin rolling out their Oculus Rift VR headset for consumers starting next summer.
Supposedly, a beta model will be released in limited quantities as early as April.

Currently, there have been tens of thousands of Dev Kits released including those sent to backers of the crowdfunded company.

How expensive can we expect the consumer model to be? Co-founders Palmer Luckey and Nate Micthell say they would prefer to keep the prices the same as the Dev Kits, which are $300-$400. "We want to stay in that $200-$400 price range," said Micthell. "That could slide in either direction depending on scale, pre-orders, the components we end up using, business negotiations..." Luckey added.

Oculus' final consumer tech is said to be so great that gamers are eagerly awaiting its release. Oculus even has some "secret" tech that supposedly was so mind blowing that Facebook CEO Mark Zuckerberg made a bid for the company immediately after having tested it. The company ended up buying Oculus VR for $2 billion.

The new evolution of gaming... Just imagine playing in a game like Skyrim or others within virtual reality. Anything's possible. I am real curious.

They should have stereoscopic cameras on the front of the unit facing outward. Then, imagine a software program that can simulate the effects of LSD or Pot without actually taking the drug (while wearing this unit)...

Originally posted by ivymike: They should have stereoscopic cameras on the front of the unit facing outward. Then, imagine a software program that can simulate the effects of LSD or Pot without actually taking the drug (while wearing this unit)...


There's a lot more than visual effects. You just can't simulate being high...

Actually you can get pretty close. There are such things as Light-Sound machines and while they're not for getting high, it is plausible to feed back the same brain frequencies a person experiences while high.

I grabbed a Google Cardboard variant of a VR headset the other day off Amazon for $30. Although the build quality is a lot less than what I imagine the Oculus to be, I need to start playing around with it to see what it can do. From what I understand you can view YouTube videos as if they were on a giant screen, so that's what I'll start with... ;)