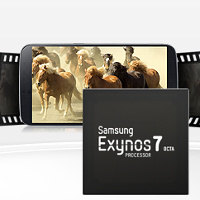 Thanks to a new report, we have some details about the upcoming Samsung Galaxy S6 flagship, codenamed Project Zero.
It is unclear what size display the new phone will feature, but it is expected to have a QHD (2560x1440) resolution that is quickly becoming standard in the high-end industry.

The camera's sensor has been updated to the IMX240, which is equal to the one seen in the Galaxy Note 4. Samsung has not yet decided on a 16MP or 20MP camera, although the 16MP OIS camera is expected given the only slight upgrades from this year's S5 model.

On the front side, the "selfie" camera is upgraded to a 5MP unit, and under the hood are 32GB, 64GB and 128GB variants, which is also quickly becoming standard. Samsung will use their own Exynos 7420 processor, which is a 64-bit chip with four Cortex-A53 and four Cortex-A57 cores. In addition, the company will use its own LTE modem (Exynos Modem 333), as the company moves to build the entire device in-house.

Another interesting feature is the detail that the Galaxy S6 will use the Broadcom BCM4773 chip, a new SoC that combines GPS and most other sensors (Wi-Fi, Bluetooth, etc) onto a single chip leading to a significant reduction in battery drainage.

Lets hope they change the look/design of the phone and make it look real stunning.

Originally posted by TrinUK: Lets hope they change the look/design of the phone and make it look real stunning.


Yeah I hope they do, getting real boring now with the same look.