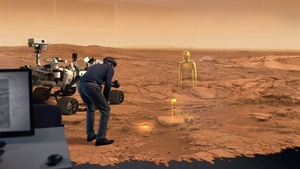 Walk on Mars? Microsoft showed off some promising and intriguing technology today in the form of Windows Holographic, and the HoloLens visor.
Microsoft wants to blend your digital world with the real world, using a visor called HoloLens with its new Windows Holographic technology. It promises to be able to give you access to your digital world in extremely useful ways without requiring a screen.

With Windows 10, Universal Apps can be used and interacted with as Holograms using the new system, making it possible to place 3D holograms in the world around you. Microsoft is providing a set of APIs for developers to take their apps into the "real world" too.

Microsoft HoloLens is the world's first "untethered holographic computer", according to the Redmond giant, requiring no wires, no phone to enable it and not even a connection to a PC. Using HoloLens, you can look at Holograms in the real world around you in 3D and even hear them in surround sound.

It is already being put to good use by NASA, which has revealed a collaboration with Microsoft on the development of software called OnSight. Working with HoloLens, NASA scientists can use data from the Curiosity Rover to virtually "walk" on Mars in the area surrounding the rover.

This allows scientists to examine the rover's worksite from a first-person perspective, plan new activities and preview the results of their work firsthand.

Here's a video Microsoft has provided to demonstrate the promise of HoloLens.

This is cool but I wonder how it knows the layout of your room and doesn't have holograms inbetween a desk or half way in a wall?

Originally posted by oneguy: This is cool but I wonder how it knows the layout of your room and doesn't have holograms inbetween a desk or half way in a wall?

Indeed. Would take some serious 3D laser scanning in real time with precise motion tracking and immense computing power. But even if it was 10% of that they show on the video, I'd go for one. =)

This explains why Google shelved the lens product! If Microsoft heavily invest into this technology and get it right? they are onto something major and a clear winner.

Glass indeed pales in comparison to this. Then again you could buy Glass. I wonder when this will hit the shelves.

Microsoft has always been good at making flashy videos to show off the concepts that they are working on. Remember the video for their electronic book product? You could take notes with a stylus and save items by pushing them into the spine of the book. Looked really cool and went nowhere. Microsoft also had that "table top" computer where you could look at photos and play games. Again, flashy concept video and the product never materialized.

But, what could we do with this hologram stuff?
Many things...

Who knows. We'll probably see this technology added to
console games.
Xbox, Wii, PC/Mac, and PlayStation could benefit from this.

Folks have been using Kinect gadgets to interact with games.
But, with holograms, we'll soon be able to interact inside
the games as though we were game pieces or "avatars".

And... if any consumer/gamer software should become of this,
I predict a package will include materials to transform
your room or space into a 'green screen' background so that
holograms can be projected from games into the space to
interact with you. It will be expensive, for sure.

I sound far-fetched crazy out of my mind with this.
But, hey, this future gaming and "HIFI"
(Holographic Interface) is possible. lol